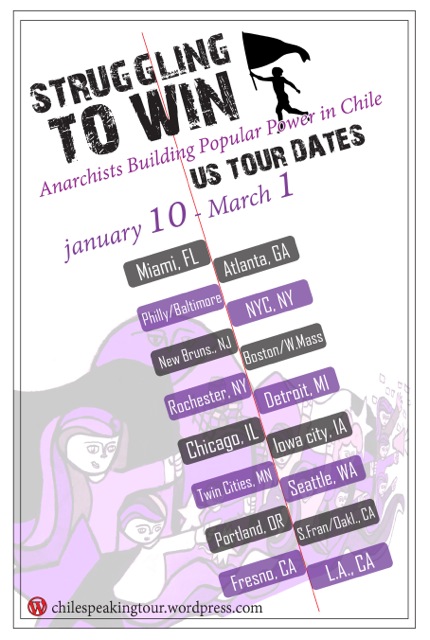 * We are reposting one of the web pages of STRUGGLING TO WIN: ANARCHISTS BUILDING POPULAR POWER IN CHILE in order to provide more information of the US Tour and share the biographies of the speakers. We hope this will encourage individuals, not only in Miami, but all over the country to attend the various events being held in different cities. Tour dates and contact information are also provided in the website as well.

Chile has a long history of working class struggle in shanty towns, factories, mines, community organizations, and schools.  In the 20 years after the US supported coup which overthrew Salvador Allende’s government, much of the organizing was done underground.  However after the fall of the dictatorship in 1990, there was a new rise of mass popular organization in the country.  Anarchists have been a major force in the social movements, strategically organizing to build power.  This has manifested in solidarity for the Mapuches, anarchists winning the student union elections at the University of Chile, militant pro-abortion actions, and libertarian labor organizations.

This national tour brings three individuals involved in these struggles to talk about the lessons learned and to create solidarity across hemispheres.  From January to the end of February, the speakers will be traveling throughout the country and we hope that you can spread the word and hear about the important work that is happening in Chile.

Gabriel has been a militant of FEL (Federacion Estudiantes Libertaria) as a high school student since 2004 (aged 16). In 2005, he helped organize support from secondary students for the ongoing university student strikes against the new university credit system. During the large scale high school movement in 2006, Gabriel participated in the ACES (Asamblea Coordinadora de Estudiantes Secundarios) as part of the propaganda brigades.

In 2008, he joined with other comrades to form the UMLEM (mural brigade) of Santiago, and the subsequent Muralista Luis Olea(MLO). He also participated in the CAE (Convergencia Anarquista Específica), in Chile as part of an attempt at forming a nation-wide anarchist organization. Later, studying in Argentina, he organized with the feminist group “Mujeres en Búsqueda” and the community organizing group “Construyendo Puentes”. He also helped form a MLO group in Argentina

In 2009 Gabriel was a participant at the ELAOPA VII (Encuentro Latino Americano de Organización Populares y Autónomas) in Argentina, a gathering of libertarian and anarchist organizations involved in social struggle. He later returned to Chile and coordinated university student participation in a popular student-run school in Renca, Santiago (La Nueva Escuela de Renca)

Gabriel continued his involvement with the ORA (Organización Revolucionaria Anarquista)[formerly the CAE]. The organization along with the Santiago organizations: EL (Estrategia Libertaria) and CAL (Corriente de Acción Libertaria) would form the FCL (Federación Comunista Libertaria). In 2010, he was elected as a delegate of the MLO to ELAOPA VIII in Uruguay. In 2011, he became the spokesman of the science faculty during the great national mobilizations, and a facilitator in the CSPPE (Congreso Social por un Proyecto Educativo, Santiago). In 2013, he was a participant in the formation of AFL (La Alzada, Acción Feminista Libertaria), the new anarchist feminist organization.

Pablo was a founding member of Librería Proyección, a social center and bookstore in downtown Santiago. Librería Proyección is a space where many social and political organizations meet, including student collectives, feminist groups, unions, artists, etc. For several years Pablo has been giving introductory workshops on anarchist history and politics in social spaces and universities. Pablo is also a member of the editorial board of the libertarian communist journal Solidaridad.

Pablo is also an English-to-Spanish translator and works mostly on academic projects (journals, publishers, etc.). In addition to several translations published as chapters in books and articles in journals, Pablo has translated Death of a Discipline by Gayatri Spivak (published in 2009) and Remaking Society by Murray Bookchin (published in 2012). Pablo is currently working on a Spanish translation of Black Flame. The Revolutionary Class Politics of Anarchism and Syndicalism, written by South African authors Michael Schmidt & Lucien van der Walt (AK Press, 2009).

Melissa will be joining the tour from Chicago and onward.  She is a founding member of the Anarchist Feminist group La Alzada, Acción Feminista Libertaria,created at the end of 2012, with the purpose of making social action and construction of libertarian feminism.  Within La Alzada, she focused her work with a domestic workers union and is now helping develop the community organizing thrust of La Alzada– taking feminism to the neighborhoods.  In addition, she is concentrating on several areas in which the gender issue is present, such as gender violence, sexuality, sexual dissidence, as well as in education, health,and the workplace. She also utilizes methods from the Theater of the Oppressed, which is a powerful tool used by La Alzada to to develop gender issues in their work

She is originally from France and has been working and living in Chile since 2009. She studied Social and Community Psychology, investigating gender issues and discrimination.  In addition she also concentrated on environment, social and political participation (both in terms of militancy and in neighborhood processes), especially territorial community involvement .

Before being a part of La Alzada, she had participated in various anarchist and libertarian groups in France and Chile, especially in the area of popular education (such as La Nueva Escuela, a self managed community school in a neighborhood of Santiago. She also painted in the MLO/UMLEM anarchist muralist group in 2009-2010.

Melissa is a songwriter, singer and musician. In the tour, she will perform some rock-folk protest songs in English, Spanish and French. She also covers several revolutionary songs such as those of Spanish civil war and Latin-American struggles.