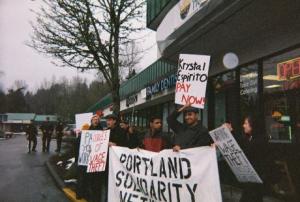 Forty people squeezed into a cramped property management office to deliver a letter. The Falcon Art Community, a rental management company dressed up as a “privately funded arts organization”, had neglected a black mold problem in the walls of Beth’s home. Health issues related to the mold forced Beth to move out and live in a tent on a friend’s lawn. The Falcon Art Community subsequently stole her security deposit.

Beth approached from the very back of the group to hand the letter to the nervous secretary as another organizer read the letter aloud, over the phone on the voicemail of the owner of the Falcon Art Community — Brian Wanamaker. Following the demand delivery, posters were put up around the Wanamaker’s properties, warning would-be tenants of the neglectful landlord. After two short months of postering (including “don’t rent here” posters) and coordinated call-ins to the office, Wanamaker paid up. Solidarity Networks like these are winning real demands and creating a newfound confidence in direct action. This article will explain what they are, where they came from and how you can help build the movement.

Around the world people are fighting back against their landlords and bosses to regain stolen wages and security deposits, stop sexual and racial harassment, and obtain needed repairs. Using a model new to many long-time community organizers, they are organizing direct action campaigns in which workers and tenants take part in and lead actions that put pressure directly on their targets until they give in. This can be anything from pickets outside of a business, to “Don’t Shop Here” posters, to showing up to the targets place of worship and talking to the congregation about their terrible practices as a boss or landlord.

Many of these groups are inspired by the Solidarity Network (SolNet) model, which can be summed up by a few basic principles and practices:

The SolNet model came out of Seattle, Washington in 2007 with the creation of Seattle Solidarity Network (SeaSol). SeaSol’s model was so successful at winning small scale worker and tenant fights that it spread to cities all over the world. There are currently SolNets in Portland, Brooklyn, East Bay (Oakland), Houston, Philadelphia, Lexington, Bristol (UK), Manchester (UK), Glasgow (UK), Sydney (AUS), Kitchner-Waterloo (CA) and Hamilton (CA).

SolNets work because they restrict themselves to attainable demands. The Solidarity Network movement started in reaction to protest movements which focused on symbolic actions to achieve vague and lofty goals. In the 90s and early 00s protest groups in the U.S. most often focused on shutting down conventions or anti-war demonstrations. These protests were rarely successful and when they were they led to little or no concrete changes in people’s lives. One canceled convention has no real impact on peoples lives. Multiple wins that empower people to make direct changes in their lives were needed to create a new confidence in direct action and direct democracy. Organizers began to ask themselves “what are the most common and noticeable expressions of exploitation that we deal with?” and “what can we win with the capacity we have?”

An important part to making the larger goals of broad social change attainable and realistic is building communities that can make decisions for themselves. Helping someone plan and carry out a successful campaign to get their stolen deposit back builds confidence in the idea that oppressed peoples can take back the things that are rightfully theirs, and that they don’t have to rely on lawyers or politicians to do it for them.

As SolNets win, they gain supporters. People that have never before taken action against the people that rule over their lives are inspired to be a part of the power that is being built. Instead of seeing the same groups of activists and organizers recycled into new projects, new militants with new ideas are being created. Through effective and life-changing action, the relevance of radical politics is seen. We need to continue this movement by building new Solidarity Networks and by growing the ones that already exist. If you live in an area that already has one then join up or lend your hand. If you want to start your own SolNet then check out this guide:

You Say You Want to Build a Solidarity Network?

In my next article I will examine how Solidarity Networks have gone beyond the single fight model and how they they can push on to have a permanent presence in our apartment buildings, workplaces, schools and transit systems.

Check out Brandon Feld’s blog at Organized by Anger.

Originally published at libcom.org on December 27, 2014.