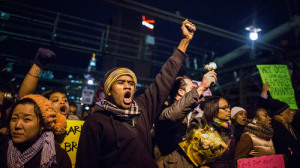 An unprecedentedly broad, decentralized, confrontational, and leaderless  movement has arisen in response to the police murders of Michael Brown, Eric Garner and too many others. With the back-to-back non-indictments of Officers Darren Wilson and Daniel Pantaleo, we have witnessed a powerful rage against the impunity of the police and their disrespect for Black life that has sparked a surge of activity not seen in recent times in NYC or across the US. What began as an isolated outburst in Ferguson has surpassed initial concerns about the longevity of the protests by quickly becoming one of the most profound American social upheavals in recent decades.
Many have said, “People are mad today, but will they still be mad next week?” Massive mobilizations over the past few weeks—-taking over streets, bridges, tunnel entrances, places of business, train and ferry stations, sometimes with planning, other times with no prior planning at all—-have allowed us to answer that question with a resounding YES.

But if we don’t expand the struggle, there will come a week when the answer is ‘no,’ and we risk a return to normal. Or if we are seduced into believing that the police can be reformed into submission with superficial policy initiatives like body cameras or civilian review boards, we may believe that we have fixed the problem only to witness more Michael Browns, more Eric Garners. At the end of the day, the police are the physical extension of the state and capital. So how can we continue the momentum while targeting the underlying systems of oppression behind the white supremacist state violence that has outraged millions?

The Movement
Since Michael Brown’s murder, an anti-authoritarian leaderless movement has emerged energized with the confrontational #ShutItDown mentality. In Ferguson, demonstrators have staged confrontational sit-ins in front of police stations, taken over streets and malls, and burned police cars. Protesters in New York City marched and successfully shut down five of the city’s bridges, two of its tunnels, two of its highways, the ferry terminal, Grand Central, and other transit hubs.

As opposed to the traditional image of the hierarchical, monolithic social movement directed from above by a handful of charismatic visionaries, we are witnessing a rapid proliferation of knowledge and experiences that is allowing protesters to apply methods of disruption to their local circumstances without looking upward for direction. As the conflict unfolds, more and more people are seeing beyond the false good cop/bad cop binary and thinking of the entire police force as the enemy.

The current decentralized movement of working-class African-American men and women and their many diverse supporters is in direct conflict with white supremacy. They proclaim #BlackLivesMatter, because combating the ingrained state violence that supports white supremacy and erases and destroys Black bodies is the ultimate goal. If you think this is just about a few cases, about just one individual cop versus one individual victim, you’re wrong.

Containment
The NYPD has allowed these marches and die-ins to happen. DeBlasio and Bratton, in conjunction with dozens of cities across the country, have devised a policy of containment and surveillance in response to the recent wave of protests.

Containment has allowed protesters to congest the traffic in the city. Bratton’s strategy is to allow the fire of the protesters to burn itself out by not providing it any extra tinder to burn by cracking down. The strategy is informed by the intelligence gathered by NYPD detectives observing the conflict on the ground in Ferguson.

Instead of busting heads right away, helicopters buzz overhead and tag protesters that step out of line; fire trucks and ambulances drive through marches scattering and dividing protesters drawing power away from marches and actions. The NYPD is trying to make us tired, uncomfortable, and, above all, trying to make us stop.

However, the NYPD containment strategy is not hands off. The cops arrested 328 people during the first three days after the Eric Garner decision. They used pepper spray, sonic cannons, and good old fashion clubs when they felt they could. Beneath the NYPD’s veneer of civility and respect towards protesters lurks the full power of state violence. Cops are still cops.

Expanding the Struggle
Shutting down business as usual through marches and die-ins is an important first step toward magnifying popular outrage at police terrorism and crystallizing resistance into a movement, but, especially considering De Blasio’s containment focus, we must raise the stakes by enhancing the depth and scope of our actions.

What if students followed up walkouts with strikes and occupations until the killer cops were prosecuted? What if all of the thousands of people who flooded the city turned to their co-workers and organized die-ins at work? What would happen if the growing mobilizations for a $15 minimum wage or decent work conditions at Walmart pushed beyond the narrow agendas of the union bureaucrats to affirm that #BlackLivesMatter at work as well as in our communities? Or if environmentalists could affirm that their movement is no less racialized than any other, and spend more time addressing the fact that communities of color breathe air that is 40% more polluted, and less time on photo-ops with Leonardo DiCaprio?

To uproot white supremacy from a society whose racism is historically ingrained, we have no choice but to expand the struggle into all areas of our lives and recognize how it thrives on capitalist exploitation, heteropatriarchal violence, and state control. And so, while we affirm the importance of intermediate demands that defund, restrict, and push back against police abuses in developing this popular movement, and stand in solidarity with those who promote them, we must remember: as an institution designed to protect the rich and enforce a de facto system of racialized terrorism in working class communities of color, the police cannot be reformed! The only solution is a popular revolution of strikes, occupations, and mass resistance to abolish the class society that spawned the police into existence in the first place.

Originally posted on December 12, 2014 at brrnnyc.tumblr.com