Today, May 15, 2018, marks 70 years since the founding of Israel and the parallel al-Nakba al-Mustamera, or “ongoing catastrophe,” which this has meant for Palestine’s indigenous Arab population. The ethnic cleansing of between 750,000 and 800,000 Palestinians and the destruction of an estimated 600 Arab villages required for the birth of Israel in 1948 continues to this day, as the Israeli military employs snipers to shoot masses of unarmed Palestinian youth protesters in the open-air prison of Gaza who have joined the Great March of Return to protest against their dispossession and oppression. Just yesterday, as Ivanka Trump and Jared Kushner celebrated the Trump Regime’s transfer of the U.S. embassy to Jerusalem, an occupied city, the Israeli Army murdered fifty-nine Palestinians in Gaza, wounding 2,700 others. This brings the total casualties borne by Gazan Palestinians since the beginning of the Great March of Return on March 30 to 107 killed and 12,000 injured.

The list of names of martyred Palestinians shows that most of those killed yesterday were teenagers and young adults, with few even in their 30’s. As Al-Jazeera reports, “at least six are below 18, including one female. Of those wounded, at least 200 are below the age of 18; seventy-eight are women and 11 are journalists.” These statistics alone show the degree of dehumanization suffered by Gazan Palestinian youth due to Occupation and more than a decade of besiegement. They go out to participate in the Great March of Return en masse knowing well that the Israeli military will not hesitate to kill them for demanding their rights.

Across Occupied Palestine, a general strike has been declared for May 15, Nakba Day, both to commemorate and mourn those slain yesterday, and to lament and resist Israel’s accelerating settler-colonial project. Though the internationally accepted “two-state solution”—which has been made impossible by the vast Israeli settlements which colonize the West Bank and East Jerusalem—would leave Palestinians with less than a fourth of historical Palestine, even this demand is too great for the Israeli ultranationalists led by Benjamin Netanyahu’s Likud Party. Israel’s fascistic response to the protests in Gaza, which recalls Selma, Alabama, in 1965 and the Sharpeville (1960) and Soweto (1976) massacres in Apartheid South Africa, shows that the Jewish State, backed up by U.S. imperialism, has no intention of allowing the Palestinians even the most basic of concessions. This is the true meaning of Kushner’s announcement that protesters in Gaza are “part of the problem and not part of the solution.” The future faced by Palestinians at the hands of the U.S. and Israel amounts to worsening genocide and/or forcible transfer to Egypt, Jordan, or elsewhere in the region.

The Middle Eastern region’s ruling classes are also useless to the Palestinian cause. For decades, they have preached a hollow ethno-religious solidarity with Palestinian refugees, yet none have mobilized against Israel or the U.S. in a serious way; instead, they serve their own interests for profit and repressive stability. Saudi Arabia’s Crown Prince Mohammed bin Salman (MBS), who recently agreed to a ten-year $350 billion arms deal with Trump, and who imports three-fifths of all his weapons from the U.S., infamously declared that Israel has “a right to its land” just days after its military carried out the Land Day Massacre of 17 Gazans on March 30, the first day of the Great March. Land Day, or Yom al-’Ard, is in turn a Palestinian holiday that observes a 1976 massacre by Israel of protesters mobilizing against State expropriation of their lands. Though bin Salman’s enthusiasm for imperialism, as reflected in his war on Yemen and his war-threats against Iran, can be considered extreme, it is hardly distinct from other regional Gulf autocracies that increasingly accommodate the Jewish State; the Jordanian Hashemite monarchy, which maintains friendly relations with Israel; General al-Sisi’s dictatorship in Egypt, which effectively coordinates with Israel in besieging Gaza from the Sinai Peninsula; the Lebanese State, which systematically discriminates against Palestinian refugees; and even and especially the falsely ‘anti-imperialist’ Assad Regime of Syria, which just weeks ago was massively bombarding the Yarmouk refugee camp for Palestinians outside of Damascus.

Though the Islamic Republic of Iran has financed and armed Palestinian resistance movements against Israel for some time, and Hezbollah has posed as a regional counterweight to the Jewish State, defeating it militarily during the 2006 “Summer War,” both have mobilized to crush the Palestinians’ brothers and sisters across the border of the Occupied Golan Heights since the outbreak of the Syrian Revolution in 2011 by intervening in favor of Assad. Indeed, among the few countries that attended the opening of the U.S. embassy in West Jerusalem yesterday, one finds representatives from several corrupt African states with which Israel has consciously developed military ties to mitigate its international isolation; neo-fascist and Islamophobic central European governments; U.S. client states in Latin America; and the Burmese dictatorship, which last year ethnically cleansed over half a million Rohingya Muslims.

For these reasons, the Palestinian people’s self-emancipation against the horrors of al-Nakba—an urgent, burning task—can only proceed through global support for mass-movements to dismantle and decolonize the imperial, settler-colonial states of the U.S. and Israel. Palestinians have the right to resist colonization by any means necessary, and it is not for us in the West to dictate how people facing genocide should or should not resist. While Israel, Raj Shah, and Bernie Sanders would like to hold Hamas responsible for the mass-murders carried out by the Jewish State, thus mimicking Putin and the Assad Regime’s long-standing tendency to blame the victims of each new bombardment and chemical attack for staging their own deaths, we see this upsurge of resistance as a manifestation of the collective will of occupied Gazans. From our vantage point in the U.S., we see Boycott, Divestment, and Sanctions (BDS) as an important tool to support the Palestinian struggle for decolonization. A two-way military embargo on the Jewish State would be an important first step toward justice in historical Palestine.

Finally, we would like to clarify that these murderous attacks by Israel against Palestinians in the Great March of Return and the protests against the embassy opening expose the hypocrisy of those who lecture Palestinians on being non-violent. They ask, “Where is the Palestinian Gandhi?”, when the reality is that the overwhelming majority of Palestinian resistance is nonviolent, and is still met with murderous repression. Palestinians are better than Gandhi, who was racist and misogynistic, in the sense that—being poor, brown, and mostly Muslim—they are despised by liberals internationally, yet they continue to resist without any of the kind of encouragement Gandhi was given by his moderate supporters across the globe, and against far worse odds. Even so, U.S. liberals continue to advocate arming and funding the settler-colonial State that murders Palestinians while hypocritically and condescendingly lecturing Palestinians about nonviolence. Liberals in the U.S. demand that Palestinians resist non-violently, but then won’t condemn Israel when it guns down peaceful, unarmed Palestinians. Mainstream liberal publications mention “clashes” and use the passive voice to report that Palestinians “have been killed,” or worse, that they just “died,” as though inexplicably, or through “natural causes.” In essence, what these colonial-Orientalist commentators are really saying is that Palestinians should passively let Israel exterminate them. We completely reject that gross illogic. Palestine must be free! 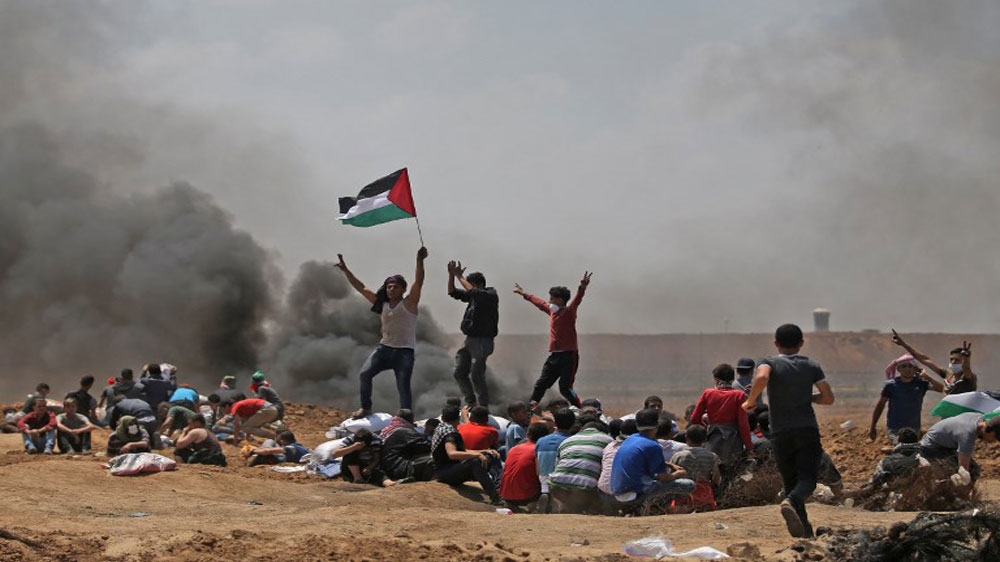 If you enjoyed this piece, we recommend reading our blog posts related to Syria and Rojava and the related articles “Syrian War in Year 7: The Age of Cyber Warfare” and Frieda Afary, from the Alliance of Middle Eastern Socialists, “Victory of Assad Regime in Ghouta is Major Defeat for Those Fighting Racism and Capitalist Authoritarianism Globally.“