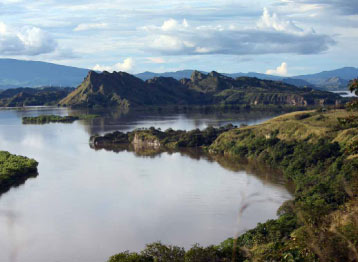 by Nutria (MAS)- The Quimbo Dam in the Department of Huila, Colombia is one of the largest infrastructure mega projects the country is currently implementing. It is expected to be functional in 2014.

Not any smaller then the Dam is this megaproject´s ecological and social impacts. The peak over the beach along the Magdalena River downhill from the village of la Jagua, the small bridge over the Yaguilga river, the church of San José de Belén, the cocoa orchards of Río Loro, the history of how La Escalereta came to be, the watering hole of el Poira, are just some of the places and things that have always existed and that the dam threatens to destroy.

During the last years, the local population has been organizing to defend its rights and its territory and demand that Emgesa-Endesa-Enel, the Italy-Spanish Corporation behind the Project, meet its social and environmental responsibilities. The region of the Quimbo is rich in endemic biodiversity and fertile agricultural lands. During the last couple of months there have been denouncements against ecological destruction, increased cost of living, psychological traumas,and abuses against local communities such as the destruction of the subsistence means that the inhabitants of the area depend on to survive.
The Comings and Goings of the Dam Project

Since 2007, Emgesa was already going around the territory raising different colored flags to show where the shores would be of the new reservoir, distributing donations to schools in the region and initiating the roundtables discussions with the affected communities that were directed by the Ministry of Environment, Housing and Territorial Development and the Departmental Government of the Department of Huila.

“The objective of these roundtables was to protect the rights of the inhabitants of the communities and to reach an agreement between the communities and the company. After some time we felt that what was being told to us within these roundtables was a lie, the Ministry´s real interest was to collect signatures as evidence for local support to the project, as of that moment we left that process. We separated and received legal and organizational counseling and we formed the Association of the Affected of the Quimbo Hydrolelectric Project –Asoquimbo. Asoquimbo is made up of the inhabitants from all the different communities that would be affected by this project and uses consensus as their decision making process” explained Elsa Ardila, President of Asoquimbo. “We fight to defend our rights as the affected and the rights of the territory.”
Since then, there has been a constant wave of declarations, gatherings, articles,concerts, theatre, documentaries and international reports pressuring for termination of this Project and for the alternate proposal of creating a Agro Nutritional Campesino Reserve as a better option for the region. In March and May of 2009 there were protests in the regional capital of Neiva, and in December of last year there were blockades along the national highway in Río Loro. The case of this mega project did not even escape from being mentioned in the WikiLeaks cables.
Nonetheless, in May 2009 Environmental license No. 150509 was issued to Emgesa-Endesa-Enel to construct the dam.

Since then the license has been modified three times and the company has not met its obligations to the environment or the local communities.

An investigation by International Rivers over the Quimbo mentions that there has been a “lack of acknowledgement of environmental norms and legal process” and that the project has been “implemented with the omission of the participation of those affected”.
When asked about this in March, Sandra Chavarro Montero, of the Technical Direction Team of the Quimbo Project affirmed that “in the environmental impact study all the impacts were identified…and the environmental plan to mitigate, compensate and control those impacts were agreed upon.” When asked about the Amazonian Protective Forest Reserve, the local resistance to the project, the frustrations of those affected or the irregularities within their process, Chavarro insisted over and over again that the project had support from the State and said “Emgesa must comply with the Management Plan approved by the Ministry and the other requirements established within the environmental license.”
On February 24 when President Santos and the major media outlets arrived to lay the first stone of the project, there was an open council meeting against the dam in the municipality of Gigante, Huila. The mobilizations continued in various cities and were followed by a public general assembly in Bogotá against mega projects.

On March 30 the Ombudsman´s Office of Colombia demanded the environmental license granted to Emgesa for the Quimbo Project be revoked immediately. Sometime later Asoquimbo organized an assembly with over 300 people. “It is clear that the Ombudsman´s Office is against this project, and that the accords the company was granted a license on with respect to the environmental impact and the compensations of people who subsist and live in those territories has not been done,” said Miller Dussán, of Platform South of Social Organizations. “As of now we suspend all forms of dialogue with Emgesa-Endesa-Enel. We remain firm that the affected area needs to be an Agro Nutritional Campesino Reserve and in the meanwhile there are desires of small scale farmers, day laborers and workers from the farms that have been sold to Emgesa to occupy and return those lands to a productive status.” Soon Asoquimbo will convene a roundtable to dialogue with the participation of international organisms such as the UN and OAS.

Meanwhile, the regional organizations continue to grow and as community participation increases they acquire more experience and knowledge of their struggle to remain on their lands. The idea of an Agro Nutritional Campesino Reserve today is a life plan for an entire region that has been woven with the participation of the affected inhabitants. It is an eco-social project generated from the communities from their own vision and sensitive to their needs.

The Quimbo in Huila, is only one controversy that Emgesa-Endesa-Enel is implicated in. In 2008, in the final session of the Peoples Permanent Tribunal: Emgesa-Endesa (prior to being acquired by Enel) was condemned for violating the rights of its workers, infringing upon industrial security and the ecological destruction of Bogotá and Guarinó Rivers among others.
South, in the Chilean Patagonia, another incredibly ecologically unique place, Endesa is being accused of destroying sacred places of the Mapuche People as they advance their plans to build dams even though there has been a constant conflict with the local organizations that fight to defend their territory. Even Andrea Echeverry from the Colombian musical band Aterciopelados took advantage of the stage in Miami toreject this environmental destruction and mining done from the “1st world” to the “3rd world”.
The Quimbo is another mega project that claims to be green, even when environmental and social impact shows it is something quite different. This is but one of many mega energy projects intended for extracting these so called natural resources from the continent. The history of el Quimbo is repeated with most of these energy mega projects. How sustainable is a development that even from before the initiation of the project, local clashes and conflicts are already arising? What is lacking is a space to debate, locally, globally, or even continentally to define a true development inclusive of the communities of the affected regions.
This story was published on Upside Down World
Tweet
Pin
Share
0 Shares