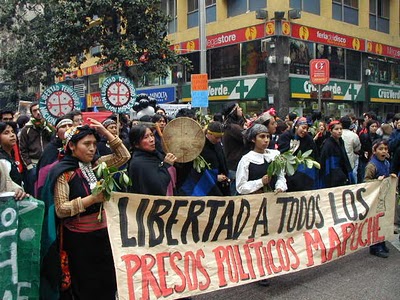 The untenable situation which the various communities of the Mapuche people have faced for centuries has once again reached crisis point.

Mapuche political prisoners, tired and weary of violations of their rights, torture and persecution, even against minors, and excessive and arbitrary treatment by the Chilean State and Judiciary, took the grave decision to go on hunger and thirst strike from Monday, 12 July this year.

These prisoners are all accused of attempting to occupy land or damage property of lumber companies, strategic businesses in Chile ‘s primary export model who have been occupying the ancestral lands of the Mapuche people.

Today, all 31 political prisoners who are split up in various high-security prisons in southern Chile (in Concepción, Temuco , Valdivia , and Angol), have risen once again as a single body and taken the difficult decision to forgo food and water, demanding a real solution to this political conflict.

Given this situation, the undersigned libertarian organizations from various parts of the world declare their full solidarity and denounce the Chilean State and judiciary.

1. Being the only country where members of an indigenous community make up the majority of political prisoners, is evidence of racism, discrimination, oppression and of an ideology typical of States managed through policies of colonial occupation, somewhat close to fascism.

2. The State of Chile has a legal structure that does not provide a fair and transparent process, i.e. what is known as the “rule of law” does not exist for the Mapuche people, since there is no equality of conditions, but only privilege for strategic economic interests of the current Chilean neoliberal accumulation pattern, i.e., lumber companies, mining companies, hydroelectric plants, big landlords, etc.

3. A systematic policy of annihilation of the Mapuche people, not only promoted by the State and the judiciary, but also by the economic and political Right, which is implemented through:
a) the Anti-Terrorism Law, created during the years of the authoritarian regime of the genocidal dictator Augusto Pinochet. This legislation aimed at crimes against life, yet so far no Mapuche has been charged with murder. However, some prisoners have received sentences of 50 and even over 100 years.

b) application of double trials, in other words, the Mapuche are tried and sentenced twice for the same offence, both for the civil justice system for the filthy military justice system, which is applied only in this country and those among the most conservative throughout the world.

c) militarization of the territory over which the Mapuche communities assert their political and territorial rights. This consists of a series of measures to apply the military and police arsenal, such as helicopters and tear gas, and the harassment of women and children without the protection of adult men, most of whom are in prison.

d) media corporations, who have ensured invisibility by ignoring the hunger strike and who, on the other hand, have consistently criminalized the Mapuche’s historic social protest and their just and legitimate struggle by generating quick and widespread condemnation among the public opinion.

e) false testimony from witnesses and testimony from witnesses with their faces covered, paid by both the prosecution and by individuals. An example is the attempt by State prosecutor Francisco Ljubetic to link the organizations of the Mapuche people with the FARC in Colombia , thus trying to create a false and disproportionate parallel between each country’s internal conflicts.

f) investigation secrecy imposed during almost the entire legal process, an action that severely impedes the right of defence.

g) most prisoners remained detained for the entire process of investigation (for over a year), a matter that does not respect the presumption of innocence, supposedly guaranteed by the current Chilean legal system.

h) prosecution and incarceration as a result of media farces stirred up by the Public Prosecutor.

i) and finally, the government continues to ignore the demands of the strikers, hoping to wear down the movement and playing with the health of community members on strike.

AN END TO THE ANTI-TERORIST LAW AND MILITARY JUSTICE

DEMILITARIZATION OF THE AREA

LAND AND AUTONOMY FOR NATIVE PEOPLES
Organizations that have signed the statement:

For updated information on the struggle and the conflict, see:
http://www.mapuexpress.net/
http://www.azkintuwe.org/