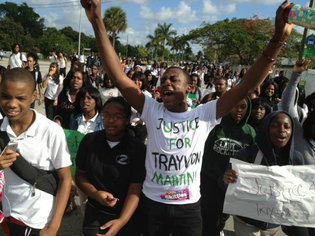 As winter turns into spring, things are heating up in Miami. The murder of Trayvon Martin, a Miami Gardens native, by a neighborhood watch vigilante in Sanford, Florida has brought systemic racism into the eyes of every American. While the details and responses are still unfolding, Miami is taking to the streets to stand against the injustice that pervades society and penetrates communities. Thursday, hundreds of students in Carol City walked out and flooded the streets in Solidarity with Trayvon. In New York and other cities, hundreds participated in a “Million hoodie march” for Trayvon. Students at FA&M, FAU, Barry, FIU, and others are coordinating more actions as we write this. Right now is a time to coordinate and publicize these autonomous actions widely, and take action.

Offering a premature analysis would not be helpful, and instead we want to offer some resources for people in understanding this senseless killing. The situation is made worse by the fact that it was simply a community member and not the police who murdered an innocent black youth. This shows how deep the interwoven system of racial oppression and class exploitation penetrate not merely our communities but also the thoughts of Americans. The radio program Against the Grain did an episode on the rise of the racist prison complex, and the role of the punitive state in our lives. Miami’s PowerU did a recent video on the school to jails pipeline. It’s worth restating that Trayvon was no criminal, and his murderer was not paid by the state to kill. When people willing murder their as vigilantes, it raises deeper questions around the racism and state that penetrates society and our lives. We need to reflect and organize against a society that criminalizes and encourages attacks on oppressed and exploited people.