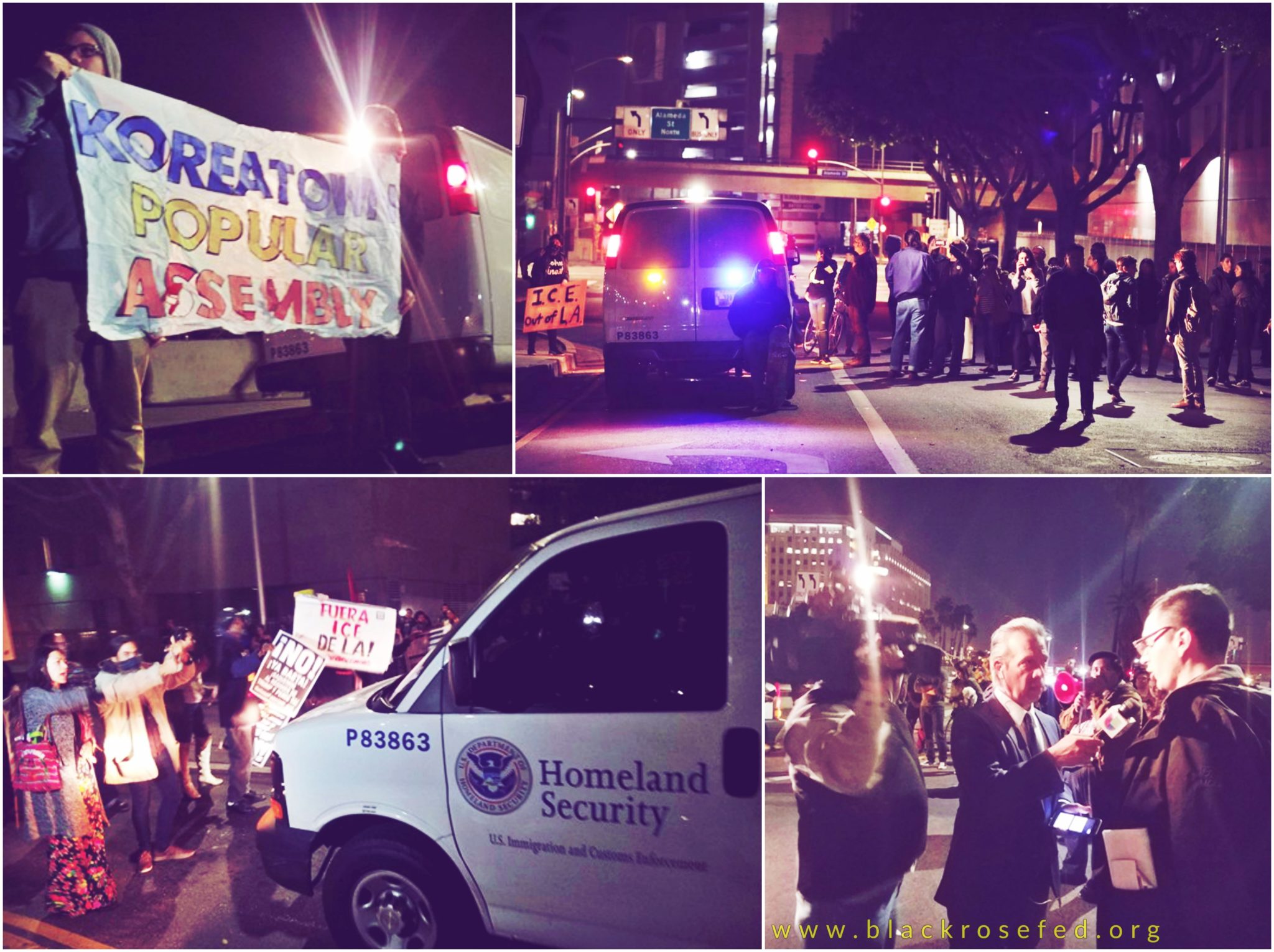 About 70 activists and community members surrounded and blocked an ICE van in front of LA’s Metropolitan Detention Center in downtown Los Angeles the evening of Thursday, February 15. The action was called for by the Koreatown Popular Assembly 24 hours prior as an emergency response to reports of ICE detaining over a 100 individuals across the city.

The mass escalation of raids by ICE are seen as part of the Trump regime’s promised targeting of “sanctuary” cities as punishment for not cooperating with immigration authorities. This is why it is essential to organize a popular response and resistance to targeted raids which are intended to strike fear in and demobilize immigrant communities. Even the small act of blocking a single van with two officers inside shows that it’s possible to disrupt ICE’s activity in Los Angeles and organizers are looking to expand this tactic.

We first discussed the Koreatown Popular Assembly in our piece “Koreatown, LA Fights Back on 7-Eleven ICE Raid,” which reported on the group’s Rapid Response Network that mobilized together with other groups on January 18 to surround a neighborhood 7-Eleven and prevent ICE from returning to the neighborhood to obtain documents from the store manager. While the manager still met with agents elsewhere the mobilization successfully prevented ICE from entering the neighborhood as a form of community intimidation. This kind of mobilization is a form of counter intimidation to ICE and prevents “collateral arrests,” an increasingly common tactic whereby ICE will ostensibly target a specific business or individual but will question and detain any person they encounter. This is how “targeted enforcement” by ICE in reality becomes broad sweeps targeting a whole neighborhood, apartment building or workplace.

The response network was a formed exactly to address situations like these as a project by the Koreatown Popular Assembly. When the nation-wide ICE raids on 7-Eleven happened the week before, members of Rapid Response Network canvassed all the stores in the neighborhood and encountered the Bengali workers who reported the prior raid and requested support.

The network canvasses in the neighborhood with flyers in Korean, Spanish, Tagalog, Bengali and English in the neighborhood and operates a 24 hour hotline to monitor reports of ICE raids. With over a year of preparation and training the hotline is staffed with around 30 dispatchers who volunteer to do two to three 4-hour shifts a week. In turn the network has trained nearly 100 first responders who are registered based on geographic areas and dispatched with text messages via an open source software platform.

The beginnings of the Koreatown Popular Assembly stem from late 2016  when shortly after Trump’s election the National Day Labor Organizing Network, a network of non-profit organizations, called for neighborhood based assemblies. But the Los Angeles based NGOs lacked a clear vision of how to make these work or become something meaningful but also didn’t exert control over the direction.

Of the five or six assemblies across the city all of them died out. But in Koreatown various organizers, which included members of LA Black Rose/Rosa Negra, pushed a vision of the assembly of approximately 125 community members becoming a democratic expression of the neighborhood. Through a process of several follow up meetings the assembly voted to prioritize the creation of the Rapid Response Network and a campaign to push for sanctuary schools. A planning committee of about 15 members was formed to meet regularly and implement the decisions.

It is significant that these actions are not the efforts of stand alone activists or NGO directed staff but a result of discussion, debate and decision making by a base of everyday people choosing the priorities based on their immediate reality and needs. The Koreatown Popular Assembly is still small and embryonic but stands out as an example of how radicals can move beyond isolated projects and work to build popular power from below.

For more information about our perspective on fighting against Trump’s white supremacist immigration policy, see our statement “After DACA: An Offensive Struggle to Win Liberation for All Migrants.”