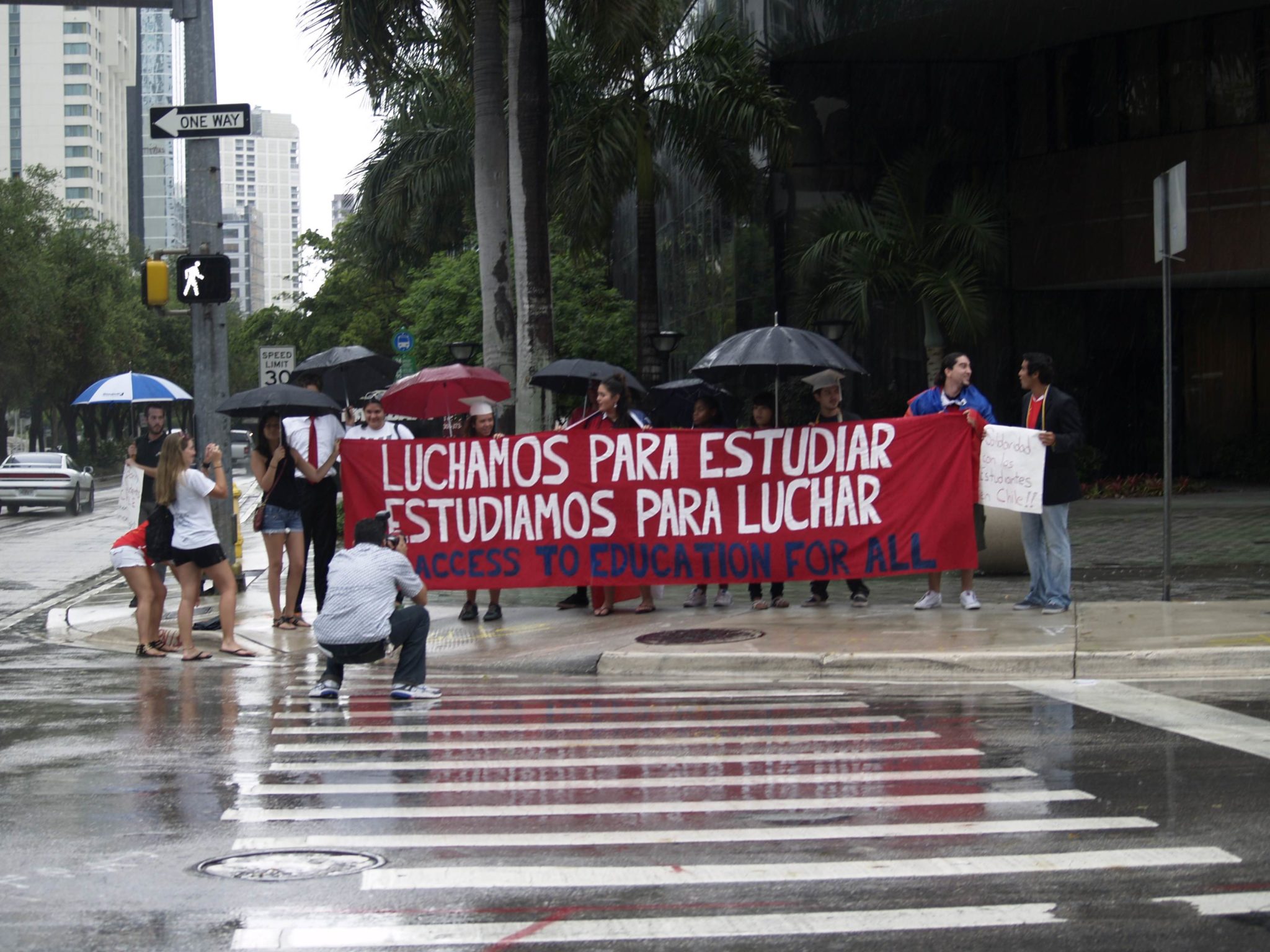 Students and activists in Miami held a protest outside the Chilean consulate in downtown Miami Monday August 8th. The rally was organized by Students Working for Equal Rights, a student organization at campuses throughout Florida that organizes around student and immigrant issues. Protesters handed out leaflets calling for solidarity with students struggling for education in Chile, and held signs and banners calling for education for all. Not all protesters were students, other members of the community came out to support the struggling students in Chile as workers, unemployed, and Chilean-americans.
In Chile, the government has sought to introduce a series of austerity measures and privatization schemes which has resulted in widespread protests and resistance, led in the first part by students fighting cuts and further neoliberal reforms. These protests have been bolstered by the participation of workers and community members, as well as the powerful mine workers. Last week police unleashed violent repression onto protestors. Protestors called for the end of the repression, and for the demands of the organized student movement.
Similar measures are being introduced in the United States and Miami, which protesters discussed. Florida International University is undergoing annual tuition hikes, class reductions, and departmental cuts. Students are saddled with massive debts, without prospect for paying them off in an economy that often effects young people the most. Immigrants are denied access to higher education, despite an imperialist system that destroyed economies in other countries and forced massive numbers into economic and political exile.
While the protests have been largely defensive and have responded to attacks from the government, the struggle has thrown up demands that go beyond the present austerity. Students have called for new forms of democracy and collectivization of education, as well as proposals to change the role education plays in society[1,2]. In an era widespread repression of the popular classes, Chile indicates a path forward with a number of forces from different sectors aligning against the cuts, but at the same time pushing for an alternative that goes beyond the limits of what this system can offer. Student organizing rapidly here and coming out despite the rain shows the potential for a student movement here in Miami to develop and to fight around the interests of students entering an increasingly desperate and miserable economy.
1. “4 de Agosto, Nueva jornada de protesta nacional contra la educación de mercado”http://www.anarkismo.net/article/20249
2. “Los libertarios y las Bases para un Acuerdo Social por la Educación Chilena”http://www.anarkismo.net/article/20264