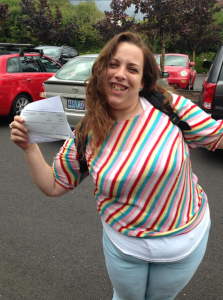 Miranda and the Portland Solidarity Network are proud to announce that we have reached amicable terms with Bluestone & Hockley. The company, now the property management company handling the Patia’s Corner Apartments, paid Miranda the full amount that was demanded. This includes her complete security deposit; the prorated rent for the time that she was not in the apartment, and the additional money for the utilities that then negligence in repairs cost her. A check for $1195 was written to her directly and her complaints and issues were finally heard and understood. This marks a major victory for the first campaign for the Outer Eastside Committee of PDXSol, and a major step forward for tenant organizing in this city.

After the community came together to support Miranda on our demand delivery, we continued our escalation campaign by postering in the apartment complex itself. These posters addressed the owners of the complex and demanded that they do the right thing and pay Miranda the owed sum. The goal of this was to publicly show what had happened and remove the shadows that negligent landlords often hide these sorts of cases in. It was also a beacon to other tenants who may have faced similar mistreatment and whose stories may have gotten brushed aside. The demand letter was sent to the owners and the property management company Bluestone and Hockley Real Estate Services, who was brought on recently and had not been in charge when Miranda was a tenant. They were unaware of what kind of conditions the tenant relationships had been under their previous property management. After seeing the community support and hearing the legitimacy of Miranda’s claims, they decided to settle and pay her the money that was owed.

The Portland Solidarity Network is committed to supporting tenants who have been the victims of slumlord practices, and will continue to build a ground-up tenants movement in the outer eastside of the city. These working class neighborhoods are some of the hardest hit areas when it comes to exploitative landlords, and the only way to truly curb this behavior is to organize and develop community power. We hope to move beyond the single cases and create a permanent network of tenants to support each other and fight back through collective and direct action. Miranda’s case shows that just a small display of our power as regular people can push forward a track of justice, and we need to take this inspiration as we head into further cases and new tenant campaigns.

From our workplace to our homes,

When we fight, we win!