Tuesday night many of us were shocked about the election of Drumpf. Social media was full of disbelief and fear. People felt a new era approaching, an era of mass deportation and registering Muslims, an era where white nationalists are comfortable in public. Last night in Richmond, Virginia, I caught a glimpse of another beginning.

A local radical organization posted a call for a 9pm protest gathering at Monroe Park, which sits adjacent to Virginia Commonwealth University, a rapidly expanding working class school. Black Rose militants, along with other revolutionaries, were involved in calling for the protest but our control over the nights events ended with the posting of a meme. The march left the park shortly after we dumped a bundle of signs to be distributed. While so many demonstrations begin late, this march nearly stepped off early.

The largely student march began with perhaps 300 people which is rather impressive since it departed from the park about five minutes after the posted start time. Our ranks quickly swelled though as angry young people joined the march by the dozens. The march couldn’t be contained by the RPD as it wound its way through the busy Broad Street area.

Some in the crowd worked to spread the chant “Love Drumpf’s Hate” but slogans like “Pussy Grabs Back” and “No Drumpf! No KKK! No Fascist USA” were clearly crowd favorites. Once the crowd raised the slogan “Michelle 2020”, but much more often the group asserted “Black Lives Matter” and “Trans Lives Matter”. Demonstrations, like social movements, are full of contradictory view points but on Wednesday night, radical critiques certainly were dominate.

While the march at one point seemed aimless, things became more clear when protesters turned toward I-95. No one I spoke to could ever remember protesters taking to the interstate in Richmond. I even laughed at a guy who suggested it because it seemed so unlikely. Much like the contradictions among the crowd over slogans, some didn’t believe the march should take the interstate. However, our march not only took the interstate, it also spontaneously decided to snake march onto ramps and across medians for an hour. Rather than occupy one space, the march restlessly sought to spread its message. While this tactic did present some safety concerns, it also successfully avoided containment by the police and kept the spirit of demonstrators high.

When the march finally exited the interstate an hour later, it received a warm welcome from the residents of nearby Gilpin Court, a housing project located near the highway. Against the urging of many, the march turned from this neighborhood back toward campus. I watched the excitement of residents melt away as the march pulled away. Protests in Richmond have often avoided Gilpin Court and other Black residential neighborhoods, likely a reflection of the priorities of the marchers. Tonight would be different though, as militants corralled the spirited march to circle the block and return to the housing project. This rerouting of the march back to Gilpin court represents a successful intervention, pushing a largely student march out of its comfort zone to share in our rage with local residents.

The march had swelled to its maximum in this part of the city. A woman marched with her two middle school aged boys, school night or not. People stood out in the cold, dressed for bed live streaming and joining in the chants. Although VCU’s role in the city lately has been one of displacement and gentrification, students and community members were united in the spirit of the night.

While the march was returning to campus, we learned that a large group which hadn’t made it onto one of overpasses was now plotting an entirely separate course. Not only had our marched snaked back and forth across the interstate, it had also split into a minimum of two marches. This large section of the march would meet back up with the other section until after midnight when students occupied the monument to Robert E Lee. 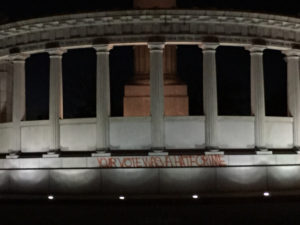 I could go through the laundry list of locations these marches visited but I’m not sure its that important. Local press has reported on vandalism to the local RNC headquarters, the morning revealed graffiti on two Confederate statues on Monument Ave reading “Your Vote was a Hate Crime”. A dozen protesters were arrested on a different highway after police pepper-sprayed the crowd attempting to plot its course. There were so many details of the night that might seem important here, but the most important element of demonstration was its spirit.

While so many had expressed fear the night before, Wednesday night was full of defiance. Few looked afraid that night. Emboldened by the sense that the entire city stood together in opposition to Drumpf and everything that he represents. While Democrats are promising to be a loyal and thoroughly impotent opposition, Wednesday night saw the beginnings of a movement to oppose Drumpf and defend our people from the threat of state and fascist attack.

In the streets with over a thousand people, taking bold action that few in attendance had ever contemplated, I could feel the beginning of an upsurge in popular momentum. Many people are feeling an unbearable weight on their chest contemplating the next four years, and while I feel that too I am also feeling optimistic about our ability to come together to reject Drumpf and his fascist agenda. Already I see many people coming together in the city and across the country getting prepared to fight. One march won’t change the world or even the city, but it lit a spark in the hearts of so many people. Our job now is to nurture that spark in our selves an in each other and to spread it as we organize not only to defend our people but also to demand radical transformation.

Since the writing of this piece, Richmond has seen two other marches which did not rival the march on the ninth in size or character. There is currently a tension in the city between those in opposition to Drumpf. Liberals organized a march over the weekend where they turned away or shouted down anarchists, the very people who had organized the first demonstration sparking this resistance. I would strongly encourage the liberals of the city to take a step back and look at the world we live in now. Are your enemies the anarchists who refuse to condemn petty property destruction? Or are your enemies the police whose union encouraged Drumpf support and whose members pepper spray and arrest us for demonstrating on 195 while it was completely empty? ICE raids that have been promised by Drumpf are a much bigger threat to the people of our community than are people who chant “Fuck the Police”. I would strongly encourage liberals to quickly adjust to the new political era we are entering. You may disagree with anarchists, but now is the time to work together to build a vibrant defense of those Drumpf and his supporters would attack.