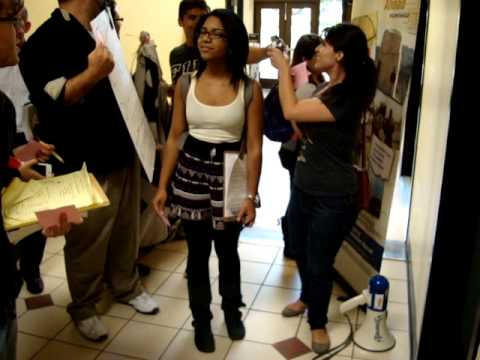 We feature these two articles written by a participant of occupy who was newly radicalized, and an observer of occupy who did interviews with occupy Miami members. MAS doesn’t endorse these articles, but offers them as an insight to the moment of occupy in South Florida.

From Below [a MAS publication] interviewed a founding member of Occupy Florida International University (Occupy FIU), an immigrant student about her experiences and reflections on the movement

FB: How did you get involved in Occupy?

OFM: I just heard about it, from the beginning I knew it was going to happen. Then I was sad just like I don’t know if it would really work…. and then I saw how it exploded when the whole pepper spray incident happened. Then other Occupies started to spring up, and I realized there was none in our city. I was looking all over and thinking ‘how come there’s no Occupy Miami?’. 2 days after the first Miami general assembly, my anthropology professor showed a video of the general assembly. Then I went to the second general assembly. I checked it out, and I cried. I was like this can’t be happening.

On the occupy Miami page, I saw that a bunch of colleges were having their own occupations going on. There was a starting occupy fiu group on the page, and I noticed we didn’t have a facebook group yet. Then me and another student were like we need a FIU one. Then this guy from FAU made a page, and me and the other student were like ‘who are you? who made this?’. So he made us administrators. We were like oh no! We got responsibility now! We have to be responsible for this!

The two us, we met. Then another group met up at fiu at the same time. Then we all got together and we started planning things, and going flyering. We planned the teach-in; the teach in was our first big thing.

FB: Was that the first thing you did politically, had you been involved in anything before this?

OFM: No, this was my first semester in college. So before that I was just in high school arguing with people.

FB: You said at the second GA you almost cried: I think that’s really common, It took me back to when I first began being involved during the anti-glob anti-war movements, and felt that myself. Why do you think it affected people like that?

I had never expected something like that to happen so soon. It’s so spontaneous how all of this happened. All of these movements sprung up spontaneously all over the world, all over the country. These people who had never met each other out of nowhere organizing like this. I had never met any of those people. It was just insane to me. I got there in the middle of when the working groups were talking to each other, was just looking at them speaking. And I was in shock thinking that this is really happening, this is amazing; because I had never been involved in anything either

FB: But you were waiting for it?

OFM: Yeah. I was just like oh my god!

FB: It’s interesting too that people just made you the admin, but instead of doing something else you stepped up right?

OFM: All my friends were just like ok I guess we have this responsibility now, and I was just scared. I was like I don’t know how to do any of these things. We just figured them out the only way we could. We just started flyering as just the two of us, and created strategies on the fly like how are we going to target people to get these flyers out, etc.

FB: Why do you think that was that you stepped up, rather than just saying no? Do you think if someone asked you the year before you would have acted the same?

OFM: I would have been excited too. I just felt like I had to do this. I don’t know what happened, I just went along with it. With my friend I was not alone, he was doing it too.

OFM: Well we didn’t know each other. We met the same day and we started passing out flyers that same moment. We didn’t know each other. I became close with everyone I met just immediately. It was weird. I don’t how it came together; it was just spontaneous. People started joining in, and some people had more experience. Some people from established groups came in and they had more knowledge of how to do those types of things.

FB: What about when you went out into the community like viernes culturales? I mean because that’s kind of a leap right? One your doing work at your school it’s the first thing you’ve done, then the next your in little Havana [mid-sentence]

OFM: Arguing with Cubans, getting threatened…. Laughs… It was interesting, also the shock of getting to know what the media is like. You always know they are like this, they try to make groups look bad, but when you experience it, it’s shocking. Some Cuban people agreed with us and some had no idea, and they decided to show only those who had no idea.  This old Cuban man showed up and I had an argument with him on camera, and told him like Cuba isn’t communist it’s state capitalist, and that shut him up.  At the end he was like ok, but of course they didn’t air that. It was shocking to see that.

FB: What about for people coming in [right-wing] libertarian, right wing, or totally nonpoliticized? Has that changed? How do they think about themselves, or has it developed or moved people?

OFM: I think it has developed people. I remember the first time I went to occupy when the occupation happened in Miami. Me and my friend were going to the metrorail to leave, and then we met this guy, and he was like ‘You just came from Occupy Miami?’ and we were talking about political beliefs and he said ‘well I personally I’m a democrat, I’ve always been a democrat but I don’t even know anymore, I don’t even know’.

When people give feedback to each other and we talk about these things, we change.

FB: Why do you think these changes happen? Like where people go from not doing anything, to being able to flyer and argue?

OFM: I don’t know. It happens spontaneously. You have this opportunity, and you start doing it. It’s really weird.

FB: Were you all talking about it? Sometimes there’s downtime in protests or collective spaces where people are just chatting and collectively figuring it out. Personally, when I’ve seen it, it often looks like a baby bird jumping of a branch straight into flight you know? Like the intermediate steps before hand couldn’t have told you that flight would happen.

OFM: Some people were like that. Some people showed up one day and were like fuck the democrats. Most people in general were non-partisan, in the beginning almost no one were a part of a party. That’s one of the biggest agreements inside the occupy movement that none of the political parties work or care, and we shouldn’t care about them either.

FB: What about the relationship to the traditional left, NGOs [non-profits], and unions?

FB: Basically this movement wasn’t coming out of that world anyway. They were hostile or in favor of the, they were totally outside of it?

FB: Interesting, where do you think it will head now for Occupy in general and Occupy FIU? What do you think the next steps are and what do you want to accomplish?

OFM: Occupy in general is probably going to split up. That’s what I see. I think it worked to get people together to learn about each other’s existence and then create these new things and groups, refresh it all, and create this new enthusiasm.

Occupy FIU, what I really want it to become and what a lot of people in Occupy FIU are really excited about making it is a public forum that is an alternative to the structure of how the bureaucracy works, especially since students at FIU are all working and don’t have time. Students in SGA [student government] are all rich kids who have the time. We’re trying to create a space for everyone.

FB: Kind of like a student union in a proper sense? Like you know in latin amer and Europe where student unions to strike and fight against tuition increases and stuff like that?

OFM: Also to make decisions of what everyone wants, and to experiment with direct democracy and get people to learn how that works. Assemblies are the main thing we care about.

FB: One last thing, what do you think your role is as a radical within this occupy movement, not just as a member but someone who has a different vision of how things can be?

OFM: Within Occupy FIU, I see my role in keeping it something horizontal and leaderless, and making sure it doesn’t turn into those other groups at FIU. Nothing against them personally, but their purpose is different, and I don’t want this to become another school group or club. I think people on their own are doing this, and when you have discussions with people they become radicalized and they radicalize you. But even on their own they get like that.