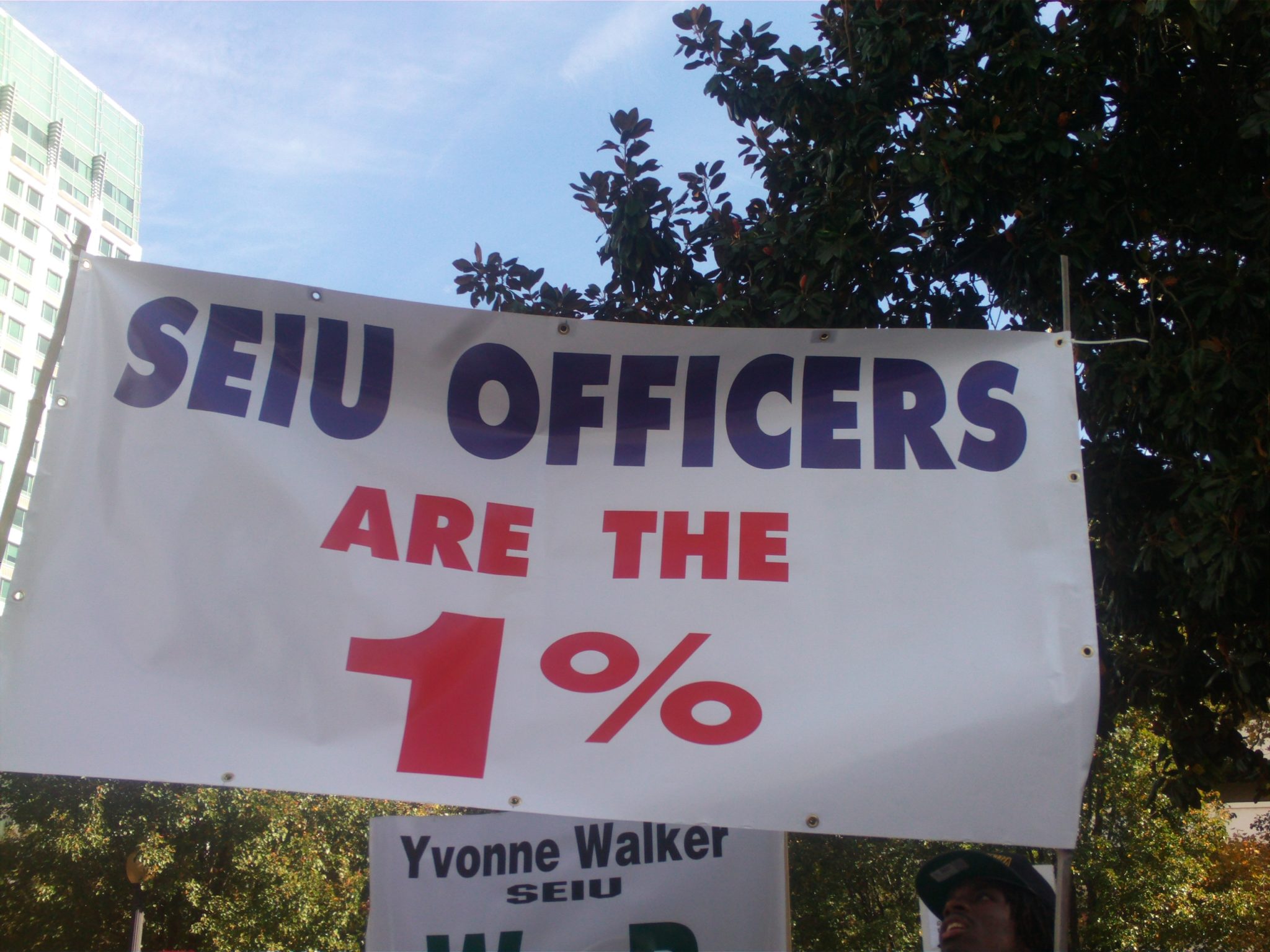 We feature these two articles written by a participant of occupy who was newly radicalized, and an observer of occupy who did interviews with occupy Miami members. MAS doesn’t endorse these articles, but offers them as an insight to the moment of occupy in South Florida.

Are there any viable alternatives for people on the left to the ills created by Liberals and Conservatives over the last decade?

What do we do now? This question has at least two answers.

One: Lets discuss if it’s time to look at the Anarchist tradition that adds much more than violent groups roaming the streets fighting the police and breaking windows.

Two: And for those people who immediately smirk and yell Utopia! lets discuss if the utopians aren’t actually those liberals, social democrats and leftists that continue to insist on voting for the Democrats, the lesser of two evils.

Anarchists are violent or unrealistic, argue the pundits.

That has the same depth as trying to explain the Democratic Party by blaming elected officials and forgetting the party’s links to corporate funds, that also fuel the GOP, that come from industries that have fed off the current economic recession.

Anarchism, which has played an important role in the Occupy movement, proposes that people get involved in the resolution of problems that plague society, but not by visiting their legislator or writing to their senator, who by the way owe their current office to corporate campaign funding.

Anarchism can spell out ways for people to engage with others to resolve problems in the public sphere, a proposal that cannot be neutral and embraced by the 99 percent, which by the way is utopian because there is no 99 percent.

Anarchism actually requires people to create alternative social power and develop ideas and action on how to go beyond private capitalist enterprise and current government to transform a society, that like the U.S. has developed social, economic characteristics similar to those in under developed countries.

The current lack of jobs cannot be explained away by blaming current policy. Jobs have been exported and many might never come back. Workers are told they need to adjust and get the necessary education to reinsert themselves in the new economy, the information economy, the digital economy, the green economy.

What do workers in low wage industries like food and beverage services, vital to Florida’s economy need to learn to not only get better wages, but defend the current minimum wage?

Do low-wage workers, many of whom are immigrants, actually have social and economic tools, like unions, to systematically fight for their interests?

What about teachers? They have been laid off, had their salaries cut, pensions and benefits reduced. Where are the political and social organizations that represent them in Washington D.C.? Right now traditional unions, which live their political lives and invest their political contributions in the Democratic Party, are supporting the privatization of public schools at the state and federal levels.

Let’s not forget that the Obama administration has embraced a GOP education program, No Child Left Behind, and developed its own funding scheme called Race to the Top, that secures tax payer dollars for forced assessed testing like FCAT, and includes provisions that ties even more public school funding to FCAT type testing while increasing merit pay schemes for teachers.

These are just a few of the many problems surrounding the present and future of U.S. workers.

Anarchism did not create the current social divide expressed in unfair distribution of wealth, or the corruption that has left many people without their homes. Anarchism did not design nor approve the government/corporate bailout.

In a recent press conference a member of Occupy Miami said their movement is non-partisan, that it exists to make sure politicians do their jobs. Another member called it a spiritual movement open to all.

There cannot be a sound bite definition of the Occupy Miami movement, but according to those who spoke at the press conference and have participated in this movement over the last six months it as an open, community, citizen based movement that subscribes to peace and non-violence.

They added that Occupy Miami wants to influence the legislative process at the state and federal level as it denounces corporate greed.

Occupy Miami is made up by people from the middle class, small business owners, college students, parents, immigrants, union members, who have suffered the rigors of the economic recession over the last three years.

The movement seems to be very steeped in American ideas of democracy and social justice through an open pragmatic process.

Is this a movement that seeks to fulfill the American Dream that “your child will live a better life than you did?” If this dream is important how is it thought about from within Occupy?

Does that dream subscribe to Marco Rubio’s vision of free enterprise that has been the historical hallmark of American Exceptionalism?

There are other versions and experiences of Occupy

A member from Palm Beach said there is a struggle within this movement to resist cooptation by conventional politics. He added that he works so that Occupy in Florida is not coopted by Democratic Party interests.

After clarifying that he speaks only for himself, he added that many organizers support union, bread and butter issues but that despite working together they must maintain an independent and grassroots style of organizing.

This Palm Beach member added that Occupy is not a centralized, hierarchical movement; it came out of grassroots organizing with a direct action ethic; it is an anarchist group at its core and if it loses that it loses the reason why it started.

That may be true, but it is also true that Occupy movements have modeled local efforts following Occupy Wall Street who speak on behalf of the 99 percent, against the 1 percent. Does that 99 percent include police officers, who spray tear gas and evict occupiers?

Does that 99 percent also include local and federal level bureaucrats? And what about state and federal elected officials? Are they the 99 percent? What does class conflict mean for Occupiers?

Another Miami observer points out that there are many Occupy in Miami: one version of that called the recent press conference. Occupy FIU is another.

He added there are at least three organized groups (adding there are more unorganized groups) that exist offline and do their own events. He also indicated that Occupy has created a layer of new militants coming from liberalism and conservatism but who are becoming radicalized even though that will probably be sucked up by the system.

Other Occupy members who have asked to remain anonymous have spoken about members of unions, who did not identify as such but have taken the Occupy rhetoric of the 99 percent, much like the president of SEIU, who supports the reelection campaign of President Obama.

The depth of SEIU involvement and other Democratic Party involvement is not clear. Occupy members and or union members only can disclose this involvement. And they are not.

At an Occupy Miami march held in late 2011 UNITE HERE and SEIU marched with Occupy members who were in the camp.

It is hard to know if the Occupy movement is part of the solution to corporate greed and political interests linked with that constant insistence of free market solutions, but Occupy is definitely a step of some kind. At the very least it has been a step of temporary protest and mobilization, and if Miami members are right it will continue forward.

For now the camp moment is over and as one Miami member said at the press conference the camp is not the movement.

Occupy has picked up on a restlessness and irritability within American society with seemingly unsolvable problems and the route taken by politicians of both parties, deeply influenced by money that comes from private sector donors.

As George Carlin put it everybody has been bought and paid for.

The media and Occupy

After the press conference a panel of journalists close to Occupy Miami spoke about their experience and their ideas on citizen journalism.

They criticized mainstream media but also pointed to examples of validation of their media projects by the New York Times, CNN, the Washington Post, the Miami Herald.

Yet they point out that Occupy Miami is developing a strong Internet based media project along with journalists to better express what the movement is and where it is headed.

What will this media project highlight if the restlessness Occupy has tapped into leads to more radical forms of organizing? Does the current state of political culture allow “radicals” a space in this social process?

It is important, though, to keep in mind that mainstream media is still an important political, cultural and economic societal influence.

Having said that it is important to ask: Does that independent, alternative news coverage bring anything different to the table? Is it more creative? Does it innovate? Does it have more depth? Is it consistent over time?

The Occupy movement overall seems to be Internet based at this point. That is important but we can’t be too enamored with technological innovation.

Gutenberg innovated, as did the development of photography, cinematography, graphic design, radio, television, cable TV. Each medium has changed the way people communicated and consumed. That is a complex discussion that Occupiers should not try to resolve in broad sweeps, and passionate nightclub panels.

Of course Internet defenders would argue that no medium like the Internet with its freedom to create and publish, its interactive flexibility, has existed before.

However let’s not forget: We did not create nor do we own the corporate Internet Service Providers of the world. We do not own the infrastructure and sites: twitter, Facebook; we can be censored.

The recent SOPA and PIPA debate exemplify that possibility. The digital divide indicates that people’s income can limit their access to the virtual protest movement.

We can effectively argue that this dependence on broadband Internet connections would exclude the old and the poor. Not everybody has a home based broadband connection, especially the poor Latinos, blacks, and people living in rural areas, but then according to progressive media reports these same groups of people have access to smart phones, the iPhone, an Android, and that benefits Occupy.

But does that use of technology support corporate consumerism? Does that technology also support innovation within a capitalist economy? Should these questions be asked? Do we all really love Steve Jobs?

And please lets not start with accusations of communism and socialism.