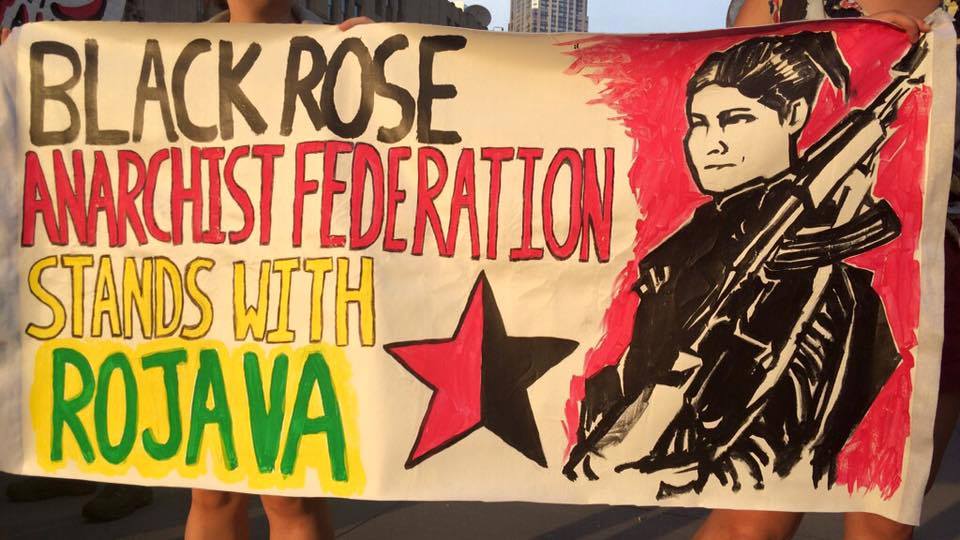 Our Perspectives and Tasks on the Revolution in Rojava

Prepared by members of the BRRN International Committee and approved by the membership.

As revolutionaries in North America we would like to outline the foundations of our political perspective as well as how we as an organization have agreed to relate the recent events and the struggle underway in Rojava in the Middle East.

The Rojava Revolution has probably made more concrete progress towards libertarian socialism than any other large-scale struggle at least since the Zapatista insurrection. For this reason alone it is important to engage with this struggle to support the most revolutionary elements of it and to hold it up as an international example of what the self-activity of the popular classes can accomplish.

While we have many questions about the overall political ideology of the Kurdistan Workers’ Party (PKK) and the Democratic Union Party (PYD) (which would need to be addressed in a separate and longer article), the specific project of democratic confederalism (which is only one part of their political vision for “democratic modernity” and the reorganization of society) has set the popular classes of Kurdistan in motion, constructing autonomous alternatives to capitalism, oppression and the state. In Rojava, and in some cases also in Bakur (north Kurdistan) when state repression doesn’t forbid it, workers’ cooperatives are being formed, land is being collectivized, women’s collectives are spreading, neighborhood assemblies are taking on power, restorative justice is replacing the court system, a democratic militia is defending the region, and other aspects of self-governance are being organized. This is not all that there is to this struggle – much of the land and capital is intended to remain in private hands, the PYD has created a new minimal state instead of abolishing the state, forced conscription has occasionally been implemented, PYD politicians have been lobbying western countries, foreign corporate investment is pursued, etc. But despite much remaining vagueness about the exact details of what’s happening on the ground (even among those who have been to Rojava), it is clear that much of the popular classes in Kurdistan are engaged in a revolutionary process that we should support. It is also clear that since a democratic revolution is based on the will of the people, it will only be through the long-term political education and organizing work among the popular classes of Rojava that the revolution will generalize beyond the current active minority and continue to take shape. We believe that we have a responsibility to both contribute to that process and to learn from it.

Black Rose/Rosa Negra sees the Rojava Revolution as a very broad social movement with many social forces pushing and pulling against each other within it. These social forces represent contradictory class interests and political visions. While Abdullah Öcalan’s political vision is the dominant ideology of the movement, this vision is itself often very vague and open to different interpretations by different social forces. For example, queer activists within the movement raise the point that the essentialist feminist ideology coming from the PKK guerrillas excludes queer and trans identity, and this will need to be overcome for the revolution to progress. Another contradiction is that the economic program of ‘democratic socialism’ emphasized by some in the movement will inevitably come into conflict with the interests of the conservative landlord class within the movement. While we are hopeful that the movement has the tools necessary to continue to take internal critiques and strengthen its fight against oppression, it remains to be seen how conflicts over class exploitation will play themselves out as they develop between groups with very different material interests. In all these debates between different forces, revolutionaries will have to take sides, in order to strengthen our own politics and the forces of our comrades in Kurdistan.

We support this movement in Rojava and the rest of Kurdistan as one of the strongest mass advances towards feminism, libertarian socialism and a directly democratic society that the world has seen in recent decades. In order to continue advancing towards those goals, the forces within the movement that are closest to these political goals need to be strengthened and supported by the international left. Otherwise the movement will face either death at the hands of its many military enemies, or re-integration into capitalism (at best social democratic capitalism). The same results will also come about unless we seriously take this opportunity to bring the revolutionary struggle home to attack the foundations of US imperialism and global capitalism.

The left, and anarchists specifically, face many questions about how we can do this. Through our meetings and observations in Kurdistan, we have seen many different models for how revolutionaries – Kurdish, Turkish and international – are engaging with the struggle. We have seen that the struggle in Rojava and Bakur, despite its broad nature, cannot be detached from the “official” organizational structure of movement – the different interlocking political structures that together implement Öcalan’s ideology, such as the PKK, HDP (Peoples’ Democratic Party), PYD, DTK (Democratic Society Congress), KCK (Union of Kurdistan Communities), etc. As far as we are aware, every left group that has seriously engaged in the Kurdish freedom movement – from Stalinists to insurrectionary anarchists to Apocu – has done so by allying with these official structures in some way. However, there are some who have made these alliances while completely dissolving into those structures, while others have done so while maintaining different levels of organizational and political autonomy. These different models present a very complex array of options for how distant revolutionaries can engage with the different social and political forces within the movement through working with comrades in Kurdistan. Such choices will need to be evaluated carefully based both on the situation in Kurdistan, and our own situation, capacity and political goals.

Despite the widespread support and interest in the Rojava revolution among the left in the US and Canada, there’s been very little organized support, although recent weeks have seen some spread of organizing. There are Rojava solidarity groups in two major cities and a scattering of online efforts. We see the reasons for this being first of all the disorganized and fragmented nature of the left in the US and Canada, and specifically the libertarian left. Secondly another significant factor is the lack of a large Kurdish community here, and the lack of connections between the left in North America and the left in Kurdistan or the region around it. We believe that it is our responsibility to be part of changing this and moving the left and social movement groups towards engaging with the Rojava revolution, while taking lessons from our history with the Zapatista and Palestine solidarity movements.

Black Rose/Rosa Negra sets as its organizational goals the following:

We also recommend the subsequently published content related to the struggle in Rojava and the Syrian conflict #UnblockRojava Wins Vs. Facebook Political Censorship, Against the Assad Regime’s Conquest of Eastern Aleppo, and Comments on Trump’s Syrian Missile Strikes.