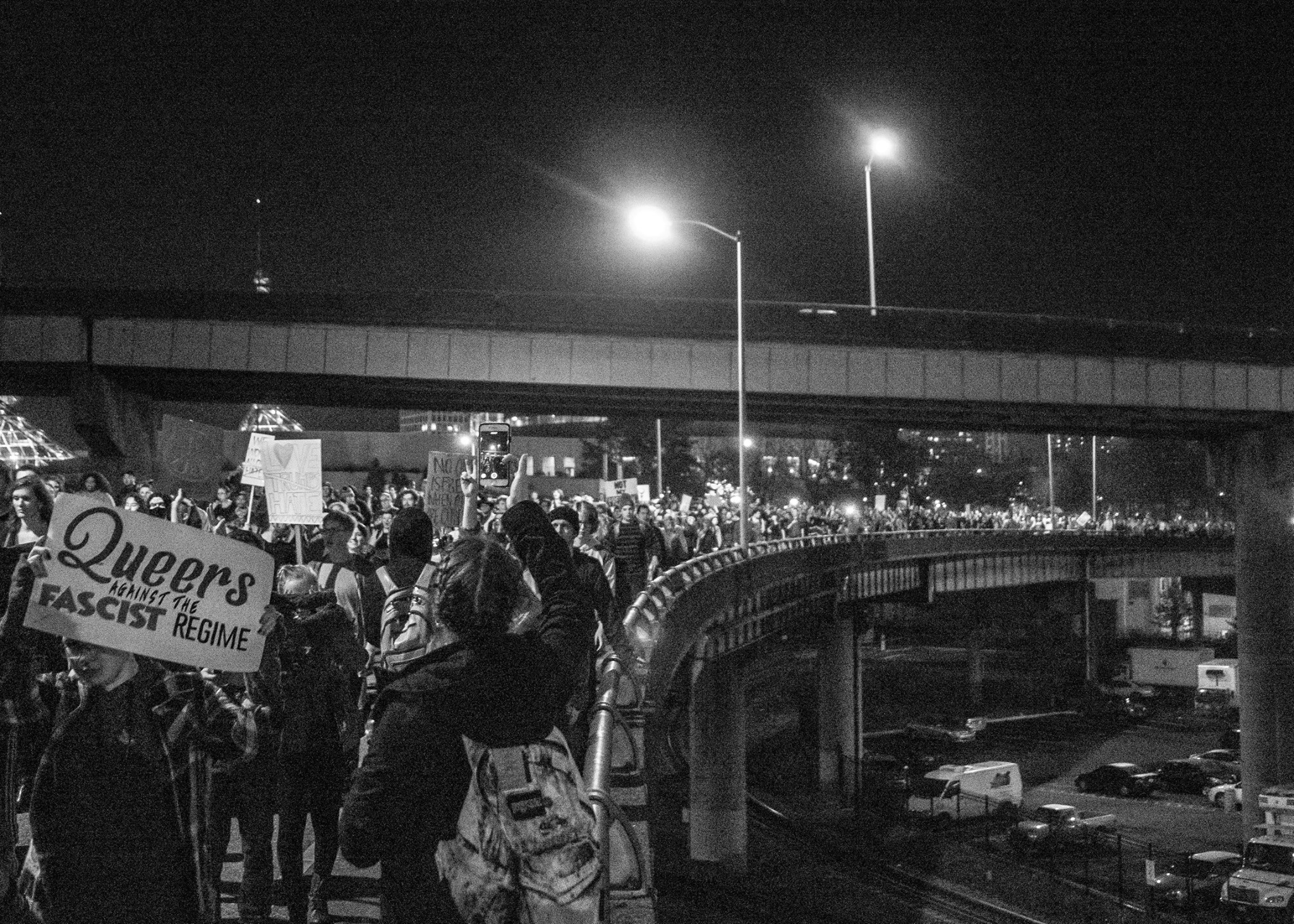 As each state came in on election maps, a sense of panic flew through many parts of the country. Hillary Clinton made up the mildly liberal side of the same capitalist coin of party politics, one that those of us with an anti-capitalist and anti-state analysis would not be scared into supporting.   This did not mean, however, that Trump’s shocking victory and the events that followed did not ignite a rage to defend our community against the rise of a fascist movement.

In Portland, hundreds of people descended into the streets on Tuesday, November 8th, heading into the early hours of the next day as the anger only swelled as we could finally see the results in three dimensions. Portland has always been a center of radical organizing, one where the police have been known to play on antagonisms as the pressure and anger are about to boil over. Nicknamed “Little Beirut” by George H. W. Bush, Portland and its surrounding areas have been critical in the radical environmental movement, the mobilization against the Bush wars, and a host of other social movements intersecting with an analysis about oppression and capitalism. It was no wonder that it would stand out as cities across the country erupted in mass mobilizations, showing the President Elect that they would set this country ablaze before they would let him institute registrations and deportations.

November 9th saw well over two-thousand people go into the streets, overwhelming city blocks and bridges, and blocking the I-5 freeway in every direction. When the police chief was challenged on the protester take-over of the freeway he said there was nothing he could do.

“This size of a crowd is going to do what it wants for as long as it wants,” Chief of Police Simpson said. “There is no way to remove 2,000 people who don’t want to be moved. We’re asking for patience from people.” 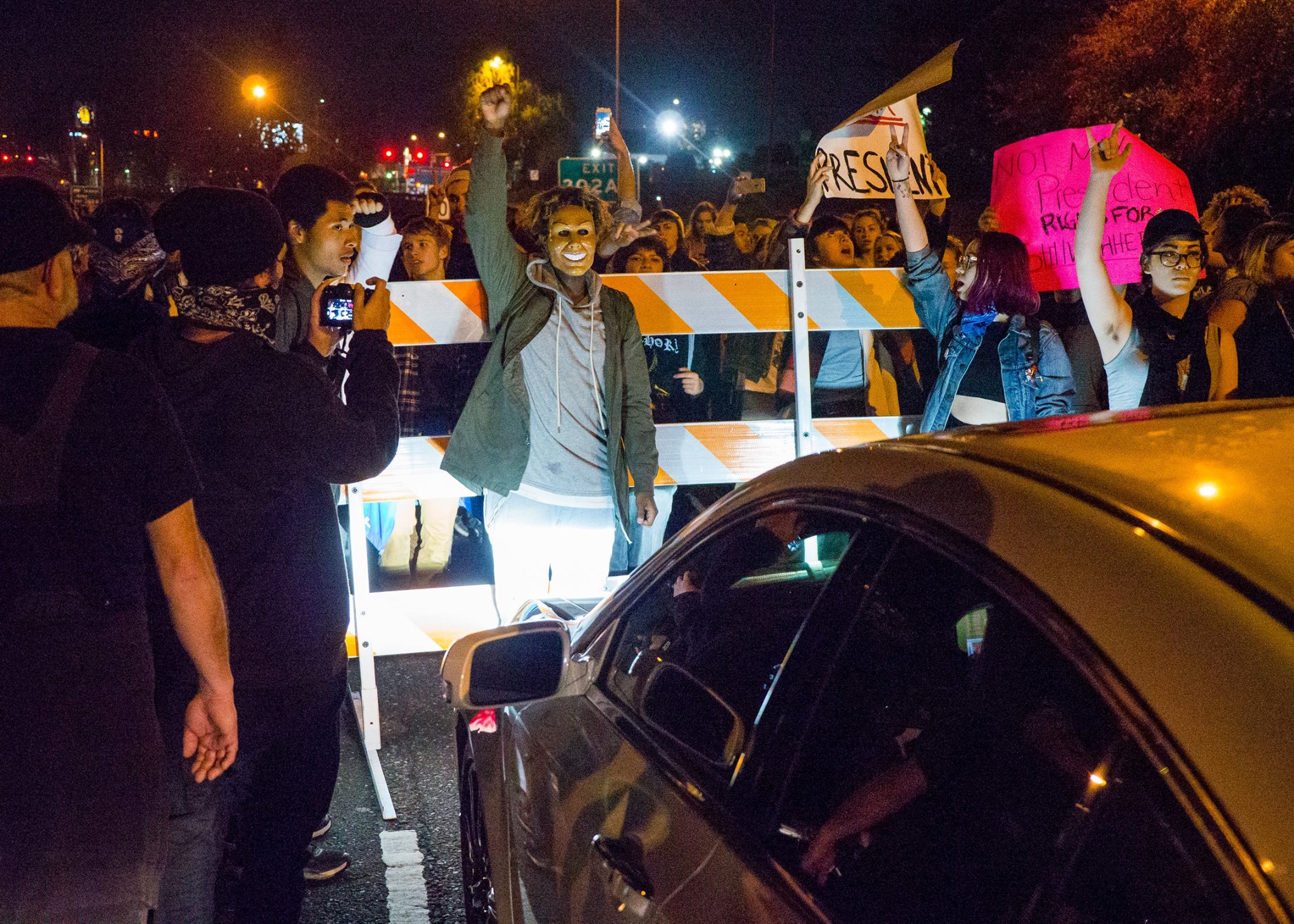 The following day doubled with 4,000 people overwhelming the city, blocking all transit through major roadways and syncing up the movement against Trump with the battle for fair workplaces, living wages, affordable housing, and the violence that people of color, trans people, women, queer people, and people of different body presentation face daily. It was here that some form of property destruction is alleged to have taken place, where police erroneously charged that the broken store and car windows amounted to $1 million in damage. Some protesters raised money for the businesses affected and did a cleanup, but despite this behavior that many organizers criticized they continued to build the movement. That night police began attacking protesters, using “dispersal” techniques like flash grenades in large crowds of people.

For every day since then there have been events and mobilizations, from SEIU calling together organizers to develop a strategy to student contingents leaving public schools and taking to the streets. Over the last several days, Portland’s Resistance, a new organization involved in many of these actions, have led student protests around the city, and have begun to see repression from local police. On November 21st, several members were plucked out of the crowd by police and arrested after doing nothing more than joining a peaceful march. They are now contesting their charges with the support of the ACLU. Several other protesters have been arrested with serious charges pending for inflated charges related to property destruction on the third night of mobilizations. The Police used Twitter and social media to distribute photos of protesters they believed were involved in property destruction, sending detectives to harass friends and family in a desperate attempt to make examples of dissidents.

The media focused on the property destruction with incredible might, as well as whether or not some of the several dozen arrested protesters had voted or not. This was a point picked up by white supremacist news outlets like Breitbart, which shows exactly what this type of messaging results in. It also ignored the fact that this was one of the biggest series of actions in the state’s history, one that united people in ways we have only dreamed of. There was anger here, but it was anger that was being put into action.

We are now more than two weeks past Trump’s victory and we are seeing with our own eyes as he appoints open nationalists like Steve Bannon and racists such as Jeff Sessions to his administration. There is every reason to believe that he is going to make good on his promises to target immigrants and Muslims, leftists and labor leaders, journalists and the most marginalized. When a fascist movement takes power then the opposition needs to be just as fierce, especially as his election has helped to fuel hundreds of racist attacks and could threaten the safety of the people in our community.

It has been two weeks of taking to our city, and it will not stop now. On January 20th we will join every major city in America, especially those in Washington D.C., to make Trump’s inauguration day one of the largest mobilizations in history. If Trump wants to threaten our communities, dismantle our rights, and attack our hearts, he won’t do it without a fucking fight.  Black Rose joins with all of these groups to continue the mobilizations, but also to do the ongoing organizing work that is going to build social movements that have the capacity to go after Trump and the rest of the ruling class infrastructure he intends to make the enemy of working people.