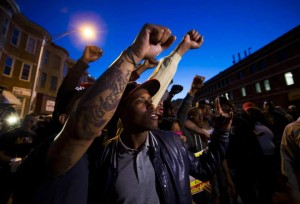 The early morning of May 1st Marilyn Mosby, the State’s Attorney for the city of Baltimore in Maryland, announced criminal charges against the six cops involved in the murder of Freddie Gray.  The charges include second-degree murder and involuntary manslaughter.  The bittersweet victory illustrated the impact of mass demonstrations at the face of injustice.  During Mosby’s early morning announcement, she pleaded: “To the people of Baltimore and the demonstrators across America: I heard your call for ‘No justice, no peace.’ Your peace is sincerely needed as I work to deliver justice on behalf of this young man.” However, as thousands marched through Baltimore and across the country, it is clear that this semblance of justice is far from enough.  In a New York Times article, a resident of the Sandtown-Winchester neighborhood noted, “I think they charged the officers just to calm the city down…But I don’t think they’re going to get convicted.”

In the last couple of weeks, the Black community in Baltimore has mobilized protests in response to the brutal murder of Freddie Gray by the Baltimore Police Department (BPD).  The news footage of Baltimore’s Black youth resisting riot cops is reminiscent of images from the Ferguson protests last summer.  Yet, they are also reminiscent of the 1992 Los Angeles Uprising, as well as the many eruptions of popular unrest across the U.S. in 1968 against racist police violence.  And we can go farther and farther back into history.  The stories are many.  The death toll to racist state violence is vast.  And many are wondering: Is this our moment to bring down the racist capitalist system?

Over the course of three years a movement has blossomed opposing anti-Black state-sanctioned violence.  The 2012 assassination of seventeen-year-old Trayvon Martin by George Zimmerman—a member of the Neighborhood Watch in Florida—sparked rallies and marches across the U.S.  Zimmerman claimed to feel threatened by Martin, noting that the young man was wearing a hoodie as an indicator of “anti-social” intentions.  In response, Martin’s family and the daily experiences that Black Americans have experienced exclaimed that the only “issue” was the color of Martin’s skin.  Zimmerman’s acquittal further highlighted how Black lives are valued in the United States of America.  They are not valued at all.

During the summer of 2014, two high profile police killings reinvigorated a movement that responded to Martin’s death.  Bystanders filmed the executions of Eric Garner in New York City and Michael Brown in Ferguson, Missouri, transforming a largely individualized occurrence into a collective memory.  The dying words of Garner pleading “I can’t breathe” and the description by witnesses who saw Brown with his hands up became the battle calls for the Black Lives Matter movement.  But as people clamored for the pretence of justice, police executions have continued.  This last February a person recorded the Los Angeles Police Department (LAPD) confrontation and shooting 39-year-old Charley “Africa” Saturmin Robinet, a houseless man living on Skid Row.  In April a video surfaced of a North Charleston police officer chasing and gunning down 50-year-old Walter Scott.   In an unusual move by the North Charleston Police Department, Michael Slager—the officer who murdered Scott—was charged with first-degree murder and is currently awaiting trial.

The Murder of Freddie Gray & the Baltimore Uprising
On the Sunday morning of April 12th, Baltimore police officers on bicycles chased 25-year-old Freddie Gray in the Sandtown-Winchester neighborhood of West Baltimore, a predominantly Black and working class neighborhood.  A video soon circulated shot by Kevin Moore of Gray being dragged by police as Gray screamed in agony before he was placed into a police van.  By that early afternoon Gray was in a coma at a local hospital and passed away nine days later.  Since then information has surfaced that Gray’s spinal cord was severed and his larynx was crushed while in police custody.

While Gray lay unconscious in the hospital, rallies were organized to protest the BPD.  After his passing, Black Baltimoreans enraged over the loss of yet another Black life to police violence responded in force.  Following Freddie Gray’s funeral on Monday, April 27, the residents of West Baltimore were met with a militarized occupation that included large numbers of police in riot gear.  High school students leaving school were quickly faced with harassment that erupted into confrontations in which Black youth were pelting cops with rocks, chasing and pushing back the occupation forces.  The following day the state of Maryland deployed the National Guard, creating further tension within a movement that has expressed a loss of legitimacy for a system that has failed in every sense. 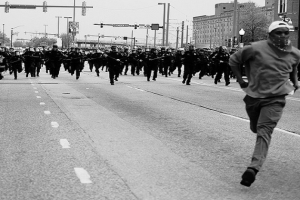 The response by the national media has been to represent the interest of state officials, mainly quoting those few individuals that call for non-violence and describe those partaking in the uprising as “thugs.”  One would almost believe that broken windows are religious idols as media outlets emphasized concern and disgust over shattered glass.  In a country in which private property is valued over someone’s life, it reflects well what the capitalist system esteems.  Allen Bullock, who unfortunately followed the advice of his parents, turned himself over to the police for smashing a cop car window.  The 18-year-old is currently being held on “$500,000 bail for one count of riot, two counts of malicious destruction of property over $1,000, two counts of rogue and vagabond, one count of disorderly conduct, and one count of theft less than $100.”  Yet, some of the police being charged for second-degree murder for the death of Freddie Gray had bails set between $250,000 and $350,000.  Do Black Lives Matter?

In an article by Ta-Nehisi Coates titled “Non Violence Is Compliance” in The Atlantic, he noted, “When nonviolence begins halfway through the war with the aggressor calling time out, it exposes itself as a ruse.”  It is a ruse that halts the development of independent and mass organizing from below.  A movement that seeks to break from dependency from the state for meager handouts and Kafkaesque justice, but instead builds prefigurative politics that can create the form of sociability that benefits humanity. Furthermore, we have to question when and what this capitalist society calls violence.  When at least 24% of the population of Baltimore lives below the poverty level and when we live in a country in which 1 in 3 black males will go to prison in their lifetime.  In an article by Mother Jones, they reported, “Between 1968 and 2011, black people were between two to eight times more likely to die at the hands of law enforcement than whites.”  State violence is racist and racism is systemic, fully embedded in the capitalist system.  Recurring claims that the issue with the police are a “few bad apples” are as misconstruing that racism is equivalent to “bad ideas” by a few people.  These are the people who are shocked that racist violence recurs in 2015.  Really?

The rise and spread of liberal capitalism was constructed on the genocide and labor of kidnapped Africans and Native peoples across the Americas.  While in the years of early colonial rule, the supremacy of the Christian religion was the guiding light of violence by colonizers, overtime a racial and racist system developed that allowed those of either Spanish, Portuguese, British, or Dutch descent (depending on the colony) to control the politics and economics of the colony.  Across the Americas, race and racism developed differently.  In the U.S. a clear politics of white supremacy was built and embraced by sections of the white working-class (see The Wages of Whiteness by David Roediger), cutting against class solidarity and pushing the Black working-class further into abject poverty. It is the specter of the Klu Klux Klan’s noose that continues to terrorize people of color across the so-called “land of the free.”  However, it is a specter that is tangible and real, experienced daily through the systemic and material realities of racism that has categorized entire groups of people based on their skin color and phenotype as prone to criminality and whose labor has been devalued and classified as unskilled.  Poverty enacts a violence that is psychological and physical, reminding an individual that they are marginal and that nothing will change.  Yet, we are supposed to feel an emotional attachment to the goals of the U.S. nation-state that will use and dispose of our bodies as needed for its wars abroad and at home.  As people organize to not only temper but burn that motherfucking noose there is a growing sense of loss of legitimacy for that territory known as America brewing alongside a growing trust between those of us who are building sociability in our streets.  It is through these struggles—confronting anti-Blackness and capitalism–that we will rebuild a new society and destroy forever white supremacy.