UPDATE: Isbel and Jimmy have been released as of Sunday, May 13. Please read their statement below the original article.

Havana, Cuba – Following tensions around the cancellation of the state sponsored LGBT march and the effort by activists to call for an independently organized one, two anarchist and LGBT activists, Isbel Diaz Torres and partner Jimmy Roque Martinez, are believed to have been detained by Cuban authorities. The detentions are seen as an attempt by the Cuban state to suppress and intimidate outspoken activists whom they see as leaders and vocal activists in the LGBT community in Cuba.

My name is Mario. I’m making a statement to inform of the possible detention by the Havana police of Isbel Torres and Jimmy Roque, activists from the Taller Libertario Alfredo Lopez, El Guardabosques, and LGBT issues. Everything indicates that they were detained in the morning on their way to Vedado [neighborhood] for the last activity of the Jornada Primavera Libertaria. They called at 8am saying they were ready to head out and it’s now close to 1pm and they haven’t appeared and their phone is blocked. It’s probable that they arrested them for their connections to the march against homophobia that’s happening today, which was prohibited by the Cuban state, and which various people have promoted, including Isbel and Jimmy. In their desire to deny reality they have evidently arrested Isbel and Jimmy. We want to denounce this and call attention to this, particularly the police apparatus that continues intact here, and we want people to know about this act so that our comrades are not isolated.

Earlier this week the state run National Center for Sex Education (CENESEX) which sponsors the Conga Against Homophobia and Transphobia announced that the 12th annual march was called off due to “new tensions in the international and regional context,” and would be canceled “in compliance with the policy of the Party, the State and the Revolution.”

CENESEX, which is headed by Mariela Castro, the daughter of Cuban Communist Party leader Raul Castro, has spearheaded a number of progressive policies around gay rights which has been a positive turn from the countries past when gay and lesbians were persecuted and faced imprisonment or being sent to work camps. But in last years debate around reforms of the constitution, proposals to include gay marriage were shelved to be decided by later referendum after active pressure from evangelical religious groups.

On Friday, May 3 Torres received an interview summons by the National Revolutionary Police where authorities attempted to pressure him to not participate or publicly support for calls being made to hold an non-state sanctioned march. He was also accused of being “counter-revolutionary.”

The day prior to detention a pro-government website published a hit piece attacking the efforts calling for a non-state sanctioned LGT rally and smearing them as orchestrated and manipulated by US backed forces. The piece named Torres, calling him a “counter-revolutionary,” and falsely framed him as receiving funding by the U.S. State Department.

Nonetheless, the called for non-sanctioned LGBT rally appeared earlier today in Havana at 4pm but ended with several arrests. Further details are forthcoming.

We demand the immediate release of our comrades, Isbel and Jimmy!

Update: Isbel and Jimmy Have Now Been Released

The following statement was published by Isbel Díaz Torres on the morning of Sunday, May 13, 2019. Some context on the above banner, “Los derechos no se plebiscitan” (“Rights are not to be plebiscited”): During debate over changes to the Cuban constitution, language allowing gay marriage was removed as the state bowed to a public pressure campaign from religious and evangelical groups. The resulting language, approved in a February referendum, left the question of marriage undefined and was characterized by the state “as a way of respecting all opinions.” According to officials the issue will be put to a 2020 referendum.

Today, Sunday at 7am, after almost 24 hours in police cells in the Aguilera police station, Jimmy and I were freed. The State Security stopped us to prevent us from reaching the independent march against homophobia that, nevertheless, happened. We are well, in our Social Center and Libertarian Library ABRA, [1] and we did not suffer any extra violent abuse to the arbitrary detention. We want to thank all the people and groups that have shown solidarity. And we want to congratulate all of us who showed a capacity for self-organization, without the need for great leadership. The multiple calls, the networks of people and collective allies, the decentralization of the call and the convergence in the fight against homophobia, transphobia, and religious fundamentalism, gave good results. Our solidarity comes to those other people who were also prevented from reaching the march, or who suffered police violence during it. #LaRevoluciónEsNuestra #LosDerechosNoSePlebiscitan

1.”Libertarian” is used here, as it is commonly in Spanish and outside of the U.S., as a synonym for anarchism. The use of the term “libertarian” to describe free market, pro-capitalist politics is generally specific to the U.S.

To support the work of Taller Libertario Alfredo Lopez members of Black Rose/Rosa Negra in Miami are hosting a fundraisertowards the Jornada Primavera Libertaria conference.

For further information on anarchist perspectives on Cuba we recommend “To my compañerxs on the Left – A Reaction to the Death of Fidel” and “Cuba and the Demonization of Anarchists: A Lesson for Our Times.” 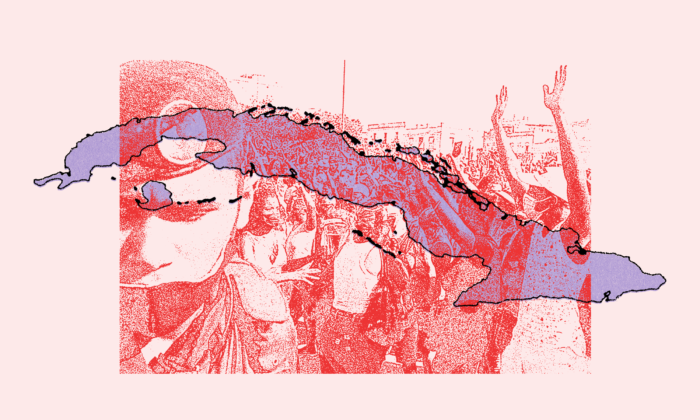