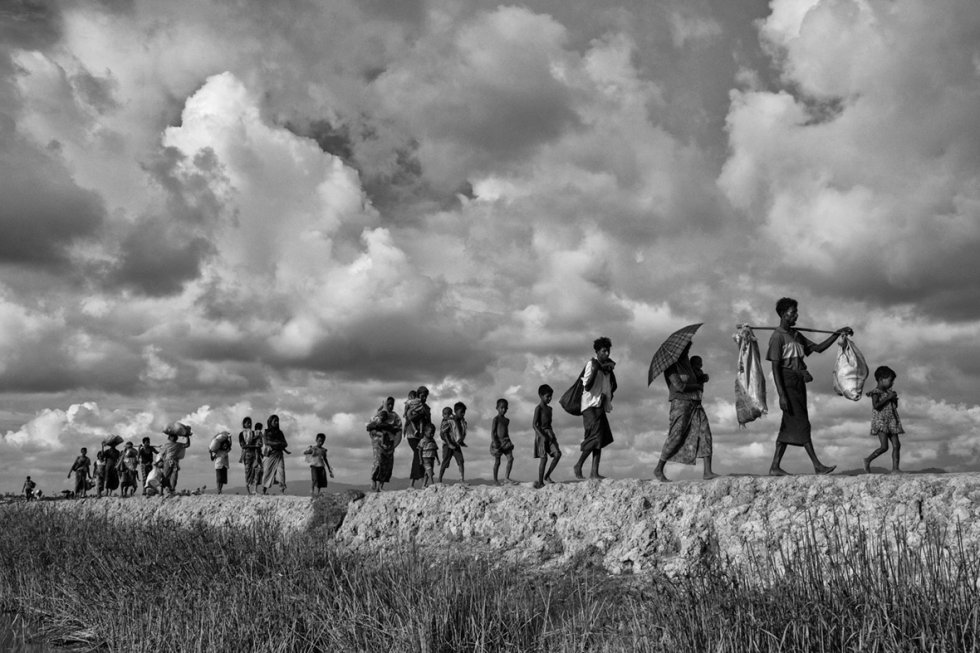 The Burmese military that effectively rules the Southeast Asian State of Myanmar is currently engaged in a campaign of intensifying genocide against the country’s Rohingya minority. Of the 1 million Rohingyas who were estimated to have lived in Myanmar’s northwestern Rakhine State before this newest episode of ethnic cleansing, approximately one thousand have been killed and over a half-million displaced in the past two months. These Rohingya refugees, many of whom are women and children, have fled the brutal scorched-earth tactics of the Burmese State for neighboring Bangladesh—although over 100,000 remain internally displaced in Rakhine in perilous conditions.

The Rohingyas of Burma

The dispossessed Rohingyas have confronted mass-murder, torture, and sexual assault and had their homes torched and their crops destroyed. Scores of villages have been burnt to the ground. In addition, the Burmese military has installed a series of landmines adjacent to the Naf River that divides Myanmar from Bangladesh, both to harm those fleeing and to dissuade their return. Why has this happened? 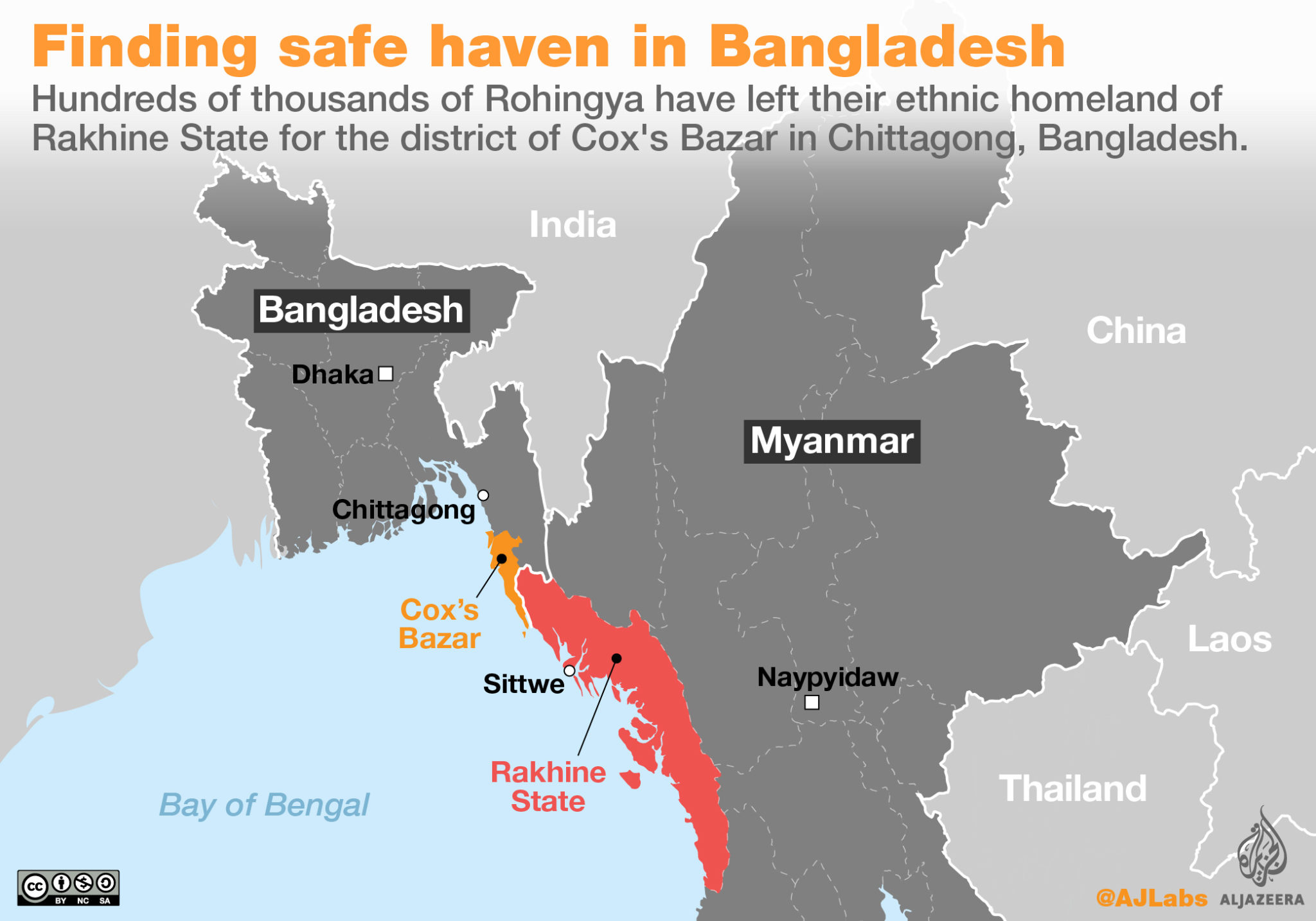 Many observers point to the ethno-religious aspects of this oppressive dynamic. Whereas the Burmese State is largely controlled by majority ethnic Bamars who are Buddhists, the Rohingya minority—considered by the State to be “Bengalis,” as from the region of Bengal that spans India and Bangladesh—are mostly Muslim, with a Hindu minority. While Islam and Buddhism are not mutually hostile to each other, such fault-lines as differing religious identities have been used in this case to prepare and ultimate rationalize the ongoing genocide. British colonialism—with its logic of racialization and bordering—prepared the groundwork for the atrocities unfolding today, as imperialists used Rohingyas during the war against Japan and even at one point promised them independence, a promise later revoked. Since its 1962 takeover in the early post-colonial period following Burmese independence from Britain in 1948, the military has promoted Buddhist nationalism as an ideal and excluded many of the country’s ethnic minorities, none more than the Rohingya. In 1974, the State identified all Rohingyas as foreigners; in 1982, it formally revoked their collective citizenship.

Over the past half-century, the State has systematically starved, enslaved, and massacred the Rohingya people. In response, between the 1970s and August 2017, an estimated 1 million Rohingyas fled Burma/Myanmar, with 168,000 refugees crossing State borders between 2012 and August 2017. In violation of international law, Rohingya refugees have been forcibly repatriated to Rakhine several times over the past 40 years. This time, however, the ethnic cleansing appears to be meant to be final. 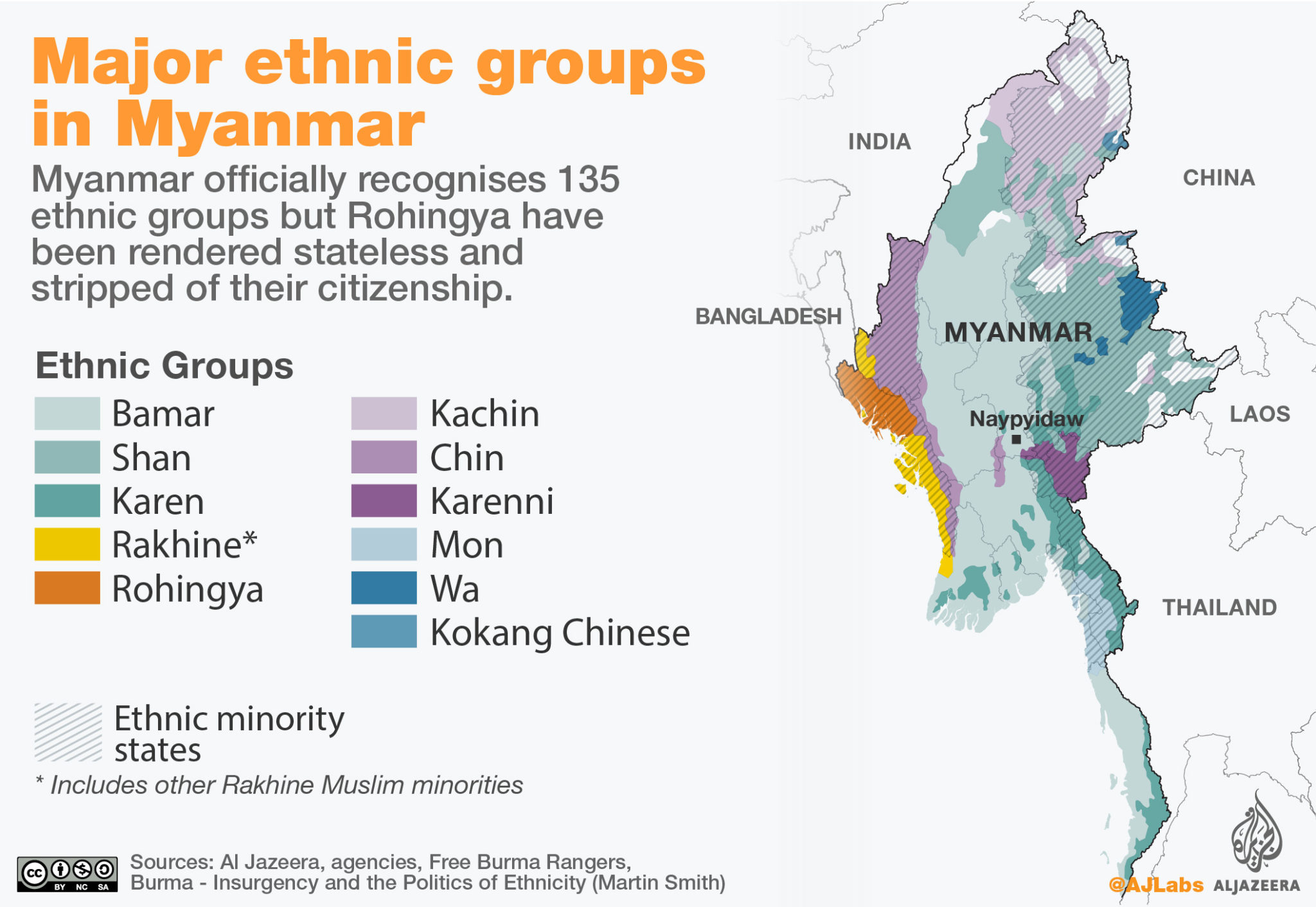 In his report on an October 2017 meeting with the U.S. ambassador, General Min Aung Hlaing, the Burmese commander accused of ordering the ongoing atrocities, falsifies history by claiming that the Rohingyas are “not native” but rather foreigners who were introduced to the country by British imperialism. Such a self-serving account overlooks the historical presence of Muslims in Rakhine since at least the fifteenth century and conveniently erases the cosmopolitan past in which Muslims, Hindus, and Buddhists coexisted without war. Ominously, Aung Hlaing has publicly declared that the ongoing “clearance operations” are meant to resolve “unfinished business” from Burma’s independence. For her part, State Counsellor Aung San Suu Kyi, the former political prisoner and recipient of the 1991 Nobel Peace Prize, is entirely complicit in these crimes, given her guarding of silence on the current crisis and her past rejection of the idea that the State’s military campaigns in Rakhine constitute ethnic cleansing.

The “Last Asian Frontier” to Capital

Yet however much responsibility for the Rohingya genocide rests with the Burmese military and ruling class, capitalist and imperialist elements play important roles in the oppression of the Rohingyas as well. The power of the Burmese State and military has grown hand-in-hand with the expanding extraction of its fossil-fuel resources and the accelerating opening-up of trade and investment in recent years. Having been relatively unknown to global capitalism, Burma/Myanmar is sometimes considered the “last Asian frontier” for capitalist models of plantation agriculture, deforestation, mega-mining, and the super-exploitation of labor.

Over the past two decades, the State has dispossessed millions of Buddhist peasants of their land to make way for corporate-extractivist projects, and before the current crisis erupted, the State had already awarded a million hectares in Rakhine for “corporate development” schemes. In northern Rakhine, moreover, the State has plans to establish a “special economic zone” with Chinese investors to construct oil and gas pipelines to the tune of $10 billion. When one considers that all burnt land in Burma reverts to State property, the meaning of its military’s “clearance operations” against the Rohingyas becomes clearer. The ferocity of the State’s response to the coordinated guerrilla attacks by the Arakan Rohingya Salvation Army (ARSA) on 40 Burmese police stations and a military base in Rakhine on August 25, which provoked the current wave of mass-displacement, shows that the ARSA attack is only a pretext for the State to implement its broadly genocidal designs. 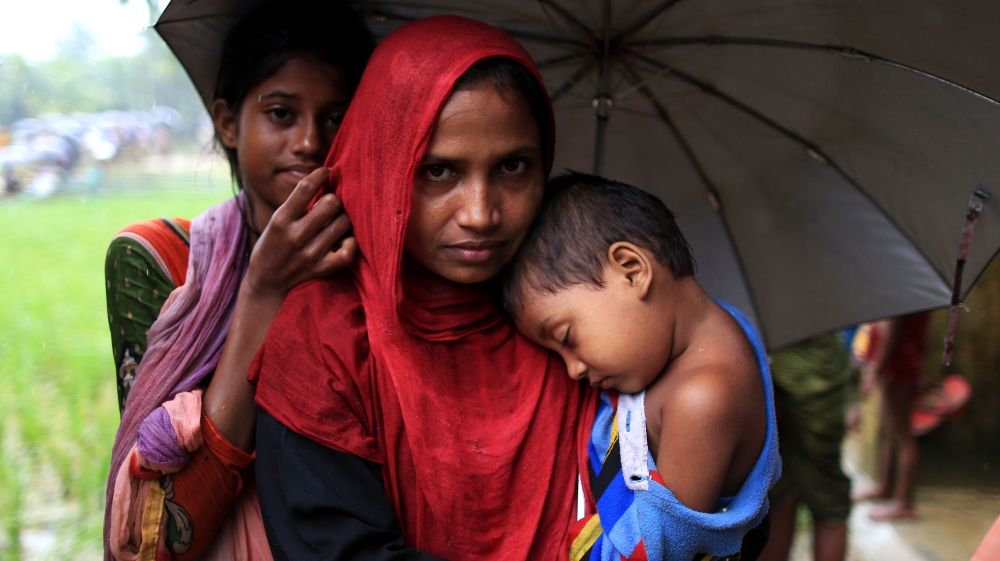 Since 1990, China, Russia, Israel, and former Yugoslavian countries have been Burma’s major arms suppliers, while the UK provides training to the Burmese military. In fact, in September 2017, the Israeli State argued before the High Court of Justice that ethics have no place in business or international relations, and that no restrictions should be placed on Israeli arms sales to Burmese security forces. Although the U.S. and the European Union currently observe an embargo on trade in weapons with the country, recent meetings between EU leaders and General Min Aung Hlain suggest that this embargo may well be lifted soon in the interests of profitability.

Moreover, recently at the United Nations, the Trump Regime cynically used accusations of war crimes against the Rohingyas as leverage against the State’s allies, China and Russia. While it is clear that Trump has no actual interest in the Rohingyas as human beings, it bears noting that the Obama administration helped legitimize Suu Kyi and the military junta she serves by suspending sanctions against Burma following her party’s electoral victory in 2015. Of course, overcoming the “barrier” that such sanctions had represented to the expansion of capital serves U.S. imperialist interests as well.

In closing, we condemn the State Terror that has targeted Rohingyas for four decades, leading to the current genocidal catastrophe, and we express our solidarity with those displaced both internally in Burma/Myanmar and as refugees in Bangladesh. We denounce all imperialist and capitalist support for the Burmese junta, whether provided by the U.S., Israel, Russia, or China. We take inspiration from the mutual aid provided by Bangladeshis to the Rohingya refugees, even as that country confronts mass-inundation and disappearance due to rising sea levels that result from capital-induced climate change. We look forward to the potential unification of peasantry and working class across ethnic lines against the Burmese State, and we demand justice.

‘Unimaginable suffering’: Inside the Rohingya Crisis (“The Stream” on Al Jazeera, 19 Oct. 2017)

If you enjoyed this article, we recommend “On the Mudslide Disaster in Freetown, Sierra Leone,” a BBC article with commentary from the BRRN External Communications-International Relations Committee, and “Against the Assad Regime’s Conquest of Eastern Aleppo,” written by comrades from the BRRN Rojava-Syria Solidarity Committee.