We are reposting this critical analysis of the struggle over representation of the Syrian Revolution online which engages with pro-Assad and pro-Russia vantage points, as well as ‘neutral’ and pro-solidarity perspectives. This was originally published by the Alliance of Middle Eastern Socialists, 13 April 2018.

We have now entered the 7th year of the Syrian war. We find ourselves caught between the crossfire of two battles; one that is annihilating forms of life in Syria, the other is the battle of ideas conflicting in cyber spheres. In recent years, the virtual world has become a defining space to exercise free thought and political debate. But as the Cambridge Analytica scandal revealed, the virtual world just like the material world, under capitalism is sold to the highest bidder. This makes it susceptible to extortion, exploitation and manipulation. Media propaganda and Russian-backed disinformation campaigns have successfully manipulated public opinion and paralyzed humanitarian response to the ailing Syrian population. What started with a group of highschool boys in the small city of Daraa in Syria has ended in one of the deadliest wars of the 21st century, a safe space for dictators and a playground for global powers.

During the past 7 years, the human casualties of the Syrian war has amounted to over 500,000 deaths including more than 3000 this year alone, 6 million internally displaced and 5 million refugees world wide. The Syrian Network of Human Rights (SNHR) has reported an estimate of70,000 barrel bombs dropped by the Assad Regime since 2012. The use of arbitrary and discriminatory weapons has extended to the deployment of chemical gas such as sarin and phosphorus gas. Rescue workers have reported at least 70 people killed and 1000 injured in a recent chlorine attack on the city of Douma earlier this month of April, 2018. The Syrian government, supported by Russia and Iran, has responded that such claims are “farcical.” Moreover  fabrications propagated by the U.S. Social media has been utilized as a mechanism to disseminate fake news resulting in the saturation of empirical truths across the internet. This left many people in the East and West in a state of confusion and skepticism when it comes Syria.

In this article, we will expand on 3 main stands adopted by people in relation to the Syrian war.

A brief look at online discourse will show that many have adopted a pro-Assad anti-U.S imperialism stand. This is due to 3 main reasons:

During the past few years, we have witnessed a drastic decrease in trust in government and mainstream media. In fact, nearly 70% people worry about fake news being used as “a weapon.”. This runs especially true for the U.S which saw a 37 point drop in trust across all institutions according to the 2018 Edelman Trust Barometer . Richard Edelam, CEO of the Edelman company, attributes this ‘crisis of trust’ not to economic issues but ‘lack of objective facts and rational discourse.’

This was the main incentive behind Russian disinformation campaigns. That is to populate the online world with conflicting narratives so that the value of objective facts decreases. From what we can deduce from online opinion on the Syrian chemical attacks and the White Helmets , the formula works.

News channels like RT and Sputnik have repeatedly dismissed chemical attacks by the Syrian Regime as fake news. The news media proceeded to cultivate an understanding that the lies about chemical attacks are attempts by the U.S to enter Syria under an imperialist agenda. Videos shared on social media by pro-Assad outlets like Syrian News1 present the chemical attack as a fake scene acted out by children who are instructed  by anti-government ‘terrorists.’ It’s not difficult to  spot the differences between real videos of the chemical attack and the one published by Syrian News1. For one, the message delivery of the video shared by the pro-Assad regime isn’t exactly subtle. Huge pro-revolution flags are visible in the background and close-up shots of children fake twitching spoon feed the audience. Secondary, examining the real video shows infants of 3 months lying in a lifeless state for over a minute. That is impossible to fake unless that child was in reality dead, in this case, murdered. Unfortunately, many people are sharing the Syrian News1 video believing the chemical attacks are fake and indeed a ploy by Trump.

The Syria Campaign and The Guardian have both reported on how smear campaigns connected to pro-Kremlin troll accounts manufactured a divisive online climate regarding The Syrian Civil Defence, also known as the White Helmet. A tool called Hoaxy was developed to chart the spread of misinformation online. It found that tweets attacking the White Helmets by linking them to terrorist organizations have reached an estimated 56 million people. The report also exposes how ‘rumours, conspiracy theories and half-truths bubble to the top of YouTube, Google and Twitter search algorithms.’

This was the narrative dominating online media making it the main source of information being consumed by  people. Combining falsehoods with a realized history of US-led imperialist intervention in the Middle East led many to support Bashar Al Assad. When compared with US imperialism and terrorist organizations, this narrative paints Bashar al Assad as the lesser of two evils and a combatant against imperialist agents.

Strangely enough, this stand has been adopted by Left and Right wing political parties. Author and columnist Ruslan Trad has condemned this stand and proclaimed it hypocritical. “Historically, the Western left has sided with the oppressed Palestinians and such choice couldn’t be more logical -yet- modern anti-imperialists claim that Russia is necessary to keep the balance. Do we really need to choose between the US and Russian imperial doctrines?

Ths stand fails to acknowledge the oppressive reign of the Assad regime and the struggles that lead to grassroot movement in quest for self-determination in Syria.

The scale of suffering experienced in Syria is insurmountable. Doctors have coined a new term “Human Devastation Syndrome” to better explain it. They stated that Syria’s children have experienced more trauma, physical and emotional pain, than any medical professionals or possibly soldiers have seen during wartime.

“We have talked to children who have seen dismantled human beings that used to be their parents, or their siblings  A lot of them have physical impairments. Amputations. Severe injuries. And they’ve made it to the refugee camp somehow. The suffering of Syrian children then continues as they endure poverty and exploitation of life in a refugee camp,” said Doctor Hamza. 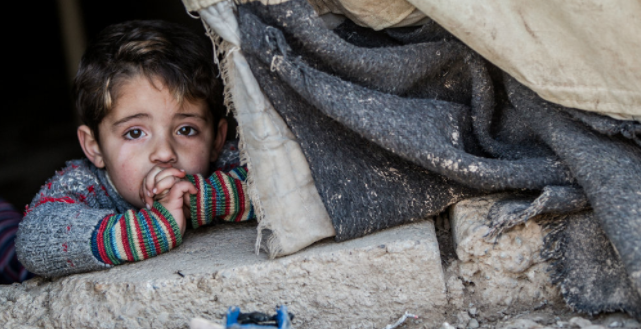 Earlier this week images of men, women and children suffocating with pinpoint pupils, convulsing, twitching and foaming at mouth have surfaced. Video of piles of dead bodies as a result of the recent chemical attack circulated the web yet silence is echoed back. For the past 7 years, the International Community has watched the humanitarian crisis in Syria intensify and worsen without interference. Some people are aware of the situation yet do not register its impact and refrain from taking any action.

On the individual level, this phenomenon can be explained by two psychological perspectives; Bystander Effect and Compassion fatigue. Bystander effect is a social psychological phenomenon detailing the unwillingness of a person to intervene during a time of emergency or crisis. Diffusion of responsibility and acting correctly become an inhibiting catalyst preventing many from recognizing the veracity of a situation. We have experienced this form of stifled response in other massacre cases like the Rwandan genocide which oversaw the murder of 800,000 people.

Compassion Fatigue is the notion that individuals have a limited capacity of empathy towards others before they get desensitized. In his latest article, CNN correspondent Nick Paton states, ‘The West needs to stop pretending it’s heartbroken over the Syrian conflict and just accept that it doesn’t care.’ He further explains that serious action has not been taken because the events (in Syria) are not personally affecting people’s lives.

I would like to extend Paton’s proposition and suggest that the current overlaying inaction is due to a eurocentric perspective, rise in nationalism and anti-refugee sentiment.

The case of the Syrian revolution is one for the books. Amidst the suffering is an undeniable fighting spirit. One that is finding contagion and support across continents. The values of the revolution that lie in liberty and cooperation against a despotic regime is signaling the possibility of alternative systems.

Below is a collection of statements from activists and people expressing their solidarity with the Syrian people and their revolt.

We recommend reading our other blog posts related to Syria and Rojava or the related article by Frieda Afary, also from the Alliance of Middle Eastern Socialists: “Victory of Assad Regime in Ghouta is Major Defeat for Those Fighting Racism and Capitalist Authoritarianism Globally.“