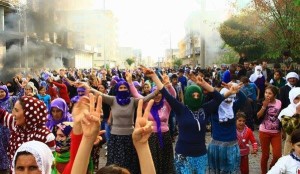 From a comrade in Turkey: After the stalling of the peace process between the governing Justice and Development Party (AKP) and the Kurdish freedom movement (in short, the KFM, which supports the legal political party called the People’s Democratic Party [HDP]),  a new phase of oppression has begun through the imposition of draconian curfews. According to […]