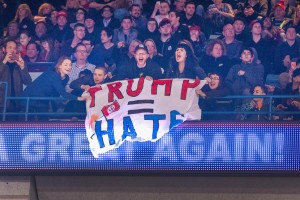 On Friday, March 11th, thousands of Chicagoans descended on the University of Illinois at Chicago (UIC) Pavilion to protest the rally of Donald Trump, including UIC students, different political organizations, affinity groups and autonomous individuals.

Our affinity group was composed of two WOC, four self-identifying sex-workers, and others, the majority of whom identify as queer folx, anarchists, marx/fems, progressive/radicals, all under the common goal of representing an Anti-fascist politic.

To be clear, no one was promoting Bernie Sanders, or any other presidential candidate within our affinity group.

We arrived three hours early for the rally, where there was already a line around the block. Outside of the pavilion, CPD had mounted police, barricades surrounding the entire building, and a protest “pit” segregated across street. The entrance saw several layers of security: TSA was assigned to overly thorough bag searches, metal detectors were in place, and secret service were administering body scans. Overall, the CPD had jurisdiction, with UIC campus police working in tandem.

Once the rally began, we saw numerous folks of color being escorted out, simply because Trump supporters identified them as “undesirable/troublemakers.” To identify them, Trump supporters were instructed to point at protesters, hold a placard over head and chant “Trump” repeatedly until security removed the person. A Trump loudspeaker/announcer said not to hit protesters, as several break out protests had already begun, and that it was to be a “peaceful” rally.

The supporter crowd bore confederate flag insignia, KKK identifying arm patches, and we heard other racist overtones. While we waited for Trump to take the stage we also saw a number of folks wearing keffiyehs, and headscarves confronted by Trump supporters. We overheard people saying they traveled from southern Illinois and Indiana, and the surrounding wealthy suburbs.

After a series of inside protests, and a half an hour plus delay, the Chicago Trump rally was ultimately cancelled, and the stadium exploded with applause, protesters jumping up and down, celebrating wildly. Our group then decided to unfurl our “Trump = Hate” banner over the balcony near the stage. We chanted, “Trump is Hate,” and held the banner for a few minutes. We saw police moving through the crowd, gathering around protesters celebrating on the ground, in addition to Trump supporters moving in and getting aggressive/fighting. We decided to join our like-minded folks on the ground, and melee ensued.

We had our hair, breasts, arms grabbed/assaulted and pulled on by Trump supporters, while security staff looked on. We were pushed and hit as we yelled at people to “stop,” and “leave us alone,” and “Calm down!” but Trump supporters were determined to rip our banner to pieces. An African American couple came to our defense and tried to free us from the hold the Trump supporters had on us. The woman who came to our defense took up the chant “Trump is Hate!” as she struggled to loosen their grip on us, ultimately allowing us to break free.

Rory Fanning of the Iraq Veterans Against the War & International Socialist Organization,  could been seen holding up a “Vets Against Racism & Imperialism” banner across the way from where we did our banner drop. Tons of other small groupings and individuals began revealing concealed banners, chanting and celebrating. Booming chorus of “We Gon’ Be Alright” could be heard.

After the filmed fighting, we moved toward the protesting crowd and exited the building, joining the mass demonstrations outside.

Thousands of protesters took the parking garage, intersections from Harrison to Van Buren on Racine, and finally the highway. The crowd outside swelled to a projected 5,000 protesters – including various Arab-American groups, unions, and student groups – a much larger crowd than the Trump supporters. We protested at least an hour following the cancellation of the rally.

Organized protests outside included Assata’s Daughters, Black Lives Matter Chicago, and BYP 100, all of whom coordinated the intersection blockade at Racine & Van Buren, specifically to link the #ByeAnita actions with the efforts to shut down Trump. They held banners and signs saying “We ❤️ Laquan,” “We ❤️ Rekia” and “Alvarez Must Go!” Folks chanted “Sixteens shots and a cover-up!” to draw attention to the murder of Laquan McDonald at the hands of CPD and the subsequent attempted cover up by State’s Attorney Anita Alvarez. Police allowed the blockade at first and then attacked protesters, some people then needing emergency care. A number of arrests happened, some protesters facing felony charges.

The ultimate message was clear: Donald Trump is not welcome in Chicago.