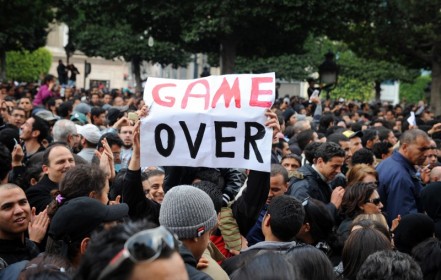 Workers, the unemployed, and oppressed classes have taken to the streets across North Africa and the Mediterranean. The world economic crisis has brought about a period of deep austerity and exploitation to the already struggling peoples of North Africa and the Mediterranean. The struggle of the Tunisian insurrection against US-backed Ben Ali autocracy has led to a sense of possibility that has inspired workers and the oppressed classes to rise up against the ruling interests of the region. Yemen, Egypt, Jordan, Tunisia, and Algeria find themselves gripped in battle against vested interests that have wrecked the lives and economies of their nations. They join the global fight against this crisis alongside workers in Europe, Asia, and the Americas.

At the same time that people are overthrowing autocracy and repression, the United States and industrial powers are maneuvering to minimize the impact of these revolts so as to maintain the power of the exploitative ruling classes and their interests in the region. Their rule has spread paralyzing poverty. While the people of North Africa and the Mediterranean struggle to gain control over their communities, work, and their region, ruling interests are attempting to bring demands for a better existence to a halt. Repressive forces are regrouping outside the old ruling coalitions and are attempting to co-opt the struggle, and channel it into avenues where it won’t threaten the dominant interests whether military, religious, political, or economic.

The fate of these struggles lies in the hands of the exploited and their movements. In order to survive the backlash against popular demands, their struggles need to expand and deepen to challenge direct control over their economy and region. Workers and oppressed peoples will increasingly be driven into conflict with the State and Capital, which has no solution to this economic crisis. If these struggles remain isolated however, they will perish.

We need to stand in solidarity with these struggles and put pressure on the government and economic interests here that benefit from the suffering of these peoples, and who are at this moment attempting to route their demands for a better way of living. The strongest solidarity we have is our own power, where we are strongest. We need to organize as workers and the unemployed in our communities and bring our fights to bear on our State and our ruling classes, many of whom are the same people North Africans are fighting now. We need to build a workers movement here that can challenge this crisis, and building a democracy starts in our communities and workplaces against the State that dominates and exploits us and people worldwide. The struggles in Yemen, Tunisia, Egypt, Greece, Jordan, and Haiti are the same struggle we should be waging against Capitalism and the State here.