On Wednesday, June 17th I awoke to a voicemail from a member of Take Back the Land, a community organization that uses advocacy and direct action tactics to help homeowners defend their homes from unjust eviction. They’d been holding an eviction watch at a home on Webster Avenue for about a week since Joe Woods was served a notice from Midfirst Bank that he and his family could be evicted at any time. The voicemail was letting me know that the marshall and the police were at the house right now, and that I should get down there as soon as possible to help try and stop the eviction. After gulping down a cup of coffee, and without eating or brushing my teeth, my fiancee and I drove down to the house.

The police presence outside Joe’s house was massive, and they had already removed the homeowners and all protesters from the property. The police stood behind yellow tape while contractors working for midfirst bank, bandannas over their faces, changed the locks and boarded up the house. These predatory capitalists demanded that the human beings who had occupied this house for 25 years had to go in the name of profit, and that another vacant house would stand in the neighborhood, contributing to urban blight in the city of Rochester.

A row of protesters were sitting in front of the driveway, arms linked together, and I joined them. We chanted our usual chants for a housing rally, we chastised the police and contractors for what they were doing. My heart wasn’t in it. I felt totally powerless. Chants of “The people united will never be defeated” rang out – but it wasn’t true. The house was being secured by the class enemy, and we were losing.

Because the 7 people who were arrested that day still have charges pending against them (myself included), this article will skip over the details of what happened next. Instead, I want explore some important questions. Why go to jail? Does this tactic even work? What are we doing to fundamentally change the power dynamics that force people from their homes? Are we truly “Taking Back the Land”?

When friends and family outside the “activist scene” hear that I’ve been arrested, they’re often perplexed. “He didn’t pay his bills, right? This is what happens when you don’t pay.” “I pay my mortgage on time, and I struggle too. What gives him the right?”

Plenty has been written about the 2008 housing crash and subsequent bailout, the widespread fraud, the racist lending practices. There’s plenty to point to that shows that these banks are evil and dishonest. A case can certainly be made that because taxpayers footed the bill to bail out “Too Big to Fail” financial institutions, these same institutions owe it to the people to be more lenient when someone is having a hard time.

But that’s not why I crossed the police line. I don’t know Joe, really. I met him once at a Take Back the Land meeting, and once more at a rally on the first day that he could have been legally evicted from the house. I didn’t even see Joe on the day they boarded up the house and I went to jail. I wasn’t even planning to be arrested when I went to the house, although I was willing to go if it was called for. This wasn’t a well choreographed display of civil disobedience. It was chaotic, unplanned, and probably dangerous.

All I know is that in that moment, the line was crossed, something inside of me twinged, and I made a dash for the front door. This is not to sing my own praises, or to prod others to engage in the same kind of act. 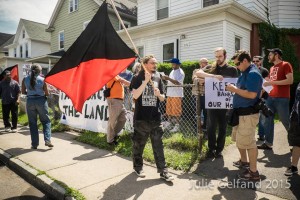 I believe in my bones that human needs like housing and fundamental things like land should be restored to the commons and not be commodities for the capitalist class to extract profit from. I believe that creating a world where all land belongs to all people begins with people willing to break the law on behalf of their neighbors, even if – especially if – they don’t even know them.

Despite seven people going to jail and getting charged with a variety of crimes, Joe has been removed from his house and it sits vacant, a monument to an economic system that values profit over all things, and a ruling class that is not accountable to government or The People. At this juncture, I’m not convinced that the tactics of individual case advocacy and civil disobedience is making the slightest dent in the housing crisis in our city – a crisis that is painfully evident driving through certain neighborhoods and down certain streets where the abandoned, rotting houses threaten to over run homes that are still occupied.

I do believe in the efficacy of blockades and the conscious, deliberate breaking of any law that stands in the way of housing for all people. There just isn’t enough of us, and the tactics of holding down space and engaging in illegal acts to do so can’t remain an “activist” endeavor if we’re going to build the power necessary to truly make “Housing a Human Right”.

What will we do to create a situation where each neighborhood has their own “Take Back the Land” group, made up of a significant number of the residents of that neighborhood, well trained in advocating for their neighbors homes and trained in effective direct action? What can we do to help build neighborhoods that boldly state “This is an eviction free zone. If you foreclose, you should expect massive resistance.” How can we foster a network of people throughout the city that is willing to break into abandoned, bank owned homes, occupy them, and defend them when the police arrive with their weaponry? This alone, building popular power based in the very neighborhoods under attack by big banks, can end foreclosure and eviction in Rochester and start to create a world that works for everyone. 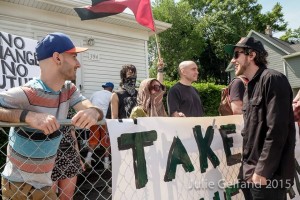