The Coup’s 2012 album, also titled “Sorry to Bother You” (intended to be the film’s soundtrack, before the screenplay started getting the attention of various famous musicians like Janelle Monáe, who ended up on the film’s actual soundtrack) came with an insert featuring this short treatise laying out Boots Riley’s communist political praxis. For much of the preceding year, he had become a prolific and influential social media commentator on the trajectory of Occupy Oakland, which was almost certainly the largest and most radical local manifestation of the occupy movement. This is a good summary of his overall ideas at that time and the call for building mass movements still strikes a chord with us today.

By Boots Riley, The Coup

This is the time to build a mass movement that can eventually evolve into a revolutionary movement that will get rid of Capitalism.

One of the key elements to this mass movement must be a radical, militant labor movement. This means a movement of workers in production, retail, and service industries who are willing to strike and shut down businesses as a means of negotiating economic change. These strikes must physically keep out scabs (replacement workers) in order to be effective. This has to be done even when it is against the law. In order to do this effectively, strike lines may have to be a combination of workers from those actual sites along with community members who are willing to help in the strategy of shutting said business down.

The thing that defines capitalism is the exploitation of labor. The wealth of the Ruling Class- the 1%, if you will- is from our labor. The conflict between the ruling class and the working class is at the point when work is done to make a commodity of service and the profit is passed up to the 1%.

When we withhold our labor, we put them at a standstill. These types of struggles explain the system to millions of people and show power in numbers. When the police come out to stop a strike it is clear to everyone that they are on the side of the ruling class. We also must be clear that while we’re fighting for immediate change- higher pay and better conditions, we must fight for a totally new system.

We must organize to keep people in their homes. This is already happening – there are neighborhood assemblies that are declaring moratoriums on foreclosures. Neighborhoods are declaring that they will mobilize to physically stop banks from foreclosing on homes in their area. We need more of this. We need to stop renters from being evicted, too.

If you’re a college student, the next frontier is free education for all. I don’t know what the first steps are- maybe it starts with stopping fee hikes, but I do know this: It won’t happen unless you make it happen. This is already going on all over the world- Canada, Spain, South America. I salute those already involved. To those not yet involved- the time is now.

Artists must be involved in this movement. Art is about engaging in life. The most engaged with the world you will ever be is when you’re changing it. We need music, visual art, film, and theater made by people with an interest in changing the world around them.

We need visual representations of the campaigns that we’re engaging in so that we have a chance of getting to people through the noise of mainstream media and the noise of social media. Yes, social media is a good tool- but the flow of it still mainly follows trends created by mainstream media. We have to create real world media- as well as internet based media- that might possibly offset the mainstream trends. I’m talking everything from taking over corporate billboards with paint, to old-fashioned murals and wheat-pasted posters, to hacking into electronic billboards- in order to publicize our own campaigns.

The main thing is- whether you’re doing a mural, re-purposing a billboard, or spray-painting a word or phrase on a wall: aesthetic and style is just as important as content. If you make something that people WANT to look at, something that makes the place more beautiful- most people will welcome what you’re putting up. Practice your art, especially if your purpose is to get a message across. This whole movement is to make the world a more beautiful place, we can represent that visually.

It’s here that I should say that a lot of the stuff I’m talking about doing with visual art may be illegal, so only do it if you know the risk.

Lastly, we’re only going to win if we work together, uniting around the broad ideas that we can agree on. Smaller political differences need to be struggled with as we go. The left in the U.S., since at least the 50s, has been plagued with the disease of breaking into smaller and smaller, more politically correct groups. This hasn’t helped build a mass movement, and it hasn’t helped build a revolution. If you think your Party or organization or collective has the answer, help build this mass movement so that maybe there’ll be way more people who want to hear your analysis. The real thing that pulls movements apart is not as much the actual political differences, as it is the way in which we talk to and about each other. If people have criticisms of each other, bring it to them before talking about it with everyone else. Doing things the other way around rallies people into teams and often from that moment on, the working relationships are not the same. These are things that one learns in a disciplined organization, but this isn’t a disciplined organization, it’s a movement, and we’re all learning as we go.

The Occupy Wall Street movement is not an identifiable organization. OWS is simply the left working together. It’s the idea that we can work together. If you opt out of that, then you opt out of the hope to build the mass movement that’s a necessary step toward changing the whole system. If there is no OWS, then you still have the same people doing work, but separated and not as powerful. Not on most people’s radar. Why would anyone want that? The Coup’s last album was called Pick A Bigger Weapon. Well, OWS is the bigger weapon- because what we had been doing so far as a fractured movement wasn’t working. Many people actually feel more comfortable going back to what they were already doing.

Changing the system is actually on the table, if we don’t take it off the table ourselves.

We need the neighborhood campaigns and canvassing. We need work stoppages, strikes, and blockades. We need to occupy public space. We need to occupy buildings. We need victories that change people’s lives in material ways. We need each other. We need a system in which we democratically control the profit we create.

If you enjoyed this piece we would also recommend “Boots Riley: Power Is Not In Elected Office” and another piece on the need for building mass movements in the current political moment, “Beyond Protest in the Age of Trump.” 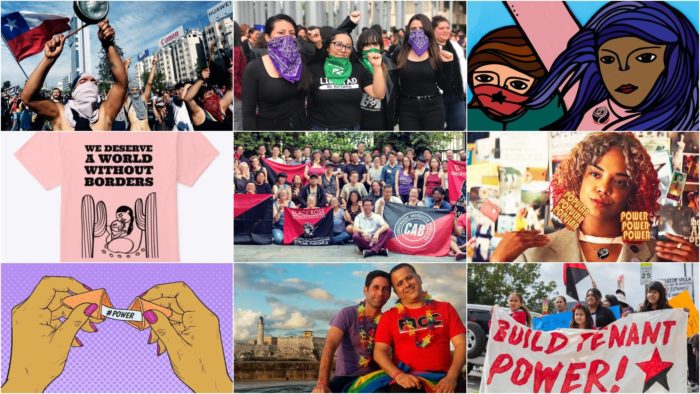 Our Best of 2019: Readings for Popular Power