A short biography of Russian anarchist and the key early figure of modern anarchism, Mikhail Bakunin. This short biographical essay is followed by links to Bakunin’s core writings, recommended writings on Bakunin as well as some of his most popular quotes.

The anarchist movement throws up many men and women, who become famous because of their actions, ideas and writings. Perhaps the best known of them all was the Russian anarchist, Mikhail Bakunin.

Anarchists do not have god-like leaders, nor all-knowing prophets. Nobody gets it right all the time and nobody is above criticism. Whoever does not make mistakes is either (a) not human, or (b) someone who never does anything at all. It is possible to take inspiration from the actions and ideas of others without falling into the trap of uncritical hero-worship.

Born in 1814 in Tsarist Russia, Bakunin quickly developed a burning hatred of injustice. At age 21, after a couple of years in uniform, he resigned from the army and began to mix in democratic circles. Nine years later he met up with radicals like Proudhon and Marx in Paris. By this stage he had formulated a theory which saw freedom being achieved by a general rising, linked to revolutions in the subject nations.

His passionate campaigning for democracy and anti-colonialism made him ‘public enemy number one’ in the eyes of most European monarchies. In 1848 he was expelled from France for making a speech in support of independence for Poland. His passion for liberty and equality, and his condemnations of privilege and injustice gave him an enormous appeal in the radical movement of the day.

The following year Bakunin rushed to Dresden where he played a leading role in the May insurrection. This led to his arrest and he was sentenced to death. The Austrian monarchy also wanted him, so he was extradited and again sentenced to death. But before the hangman could put the noose around his neck, Russia demanded his extradition and he spent the following six years jailed without trial in the Peter and Paul Fortress. Release from jail was followed by exile in Siberia.

In 1861 he made a dramatic escape and returned to Europe by way of Japan, the Panama Canal and San Francisco! For the next three years he threw himself into the struggle for Polish independence. Then he began to rethink his ideas. Would national independence, in itself, lead to liberty for working people? This took him away from nationalism and towards anarchism.

In 1868 he joined the International Working Men’s Association (also known as the First International), a federation of radical and trade union organisations with sections in most European countries. Very rapidly his ideas developed and he became a famous exponent of anarchism. While agreeing with much of Marx’s economic theory, he rejected his authoritarian politics and the major division within the International was between the anarchists and the Marxists.

While Marx believed that socialism could be built by taking over the state, Bakunin looked forward to its destruction and the creation of a new society based on free federations of free workers. This soon became the policy of the International in Italy and Spain, and grew in popularity in Switzerland, Belgium and France. After failing to defeat the anarchist idea, Marx and his followers resorted to a campaign of smears and lies against Bakunin.

A Movement is Born

A committee set up to investigate the charges found, by a majority, Bakunin guilty and voted to expel him. The Swiss section called a further congress, where the charges were found to be false. An international conference also vindicated Bakunin, and went on to adopt the anarchist position of rejecting any rule by a minority.

Defeated, Marx and his followers moved the General Council of the International to New York where it faded into irrelevance. The ideas developed by Bakunin in the last decade of his life went on to form the basis of the modern anarchist movement. Worn out by a lifetime of struggle, Bakunin died in Switzerland on July 1st 1876.

His legacy is enormous. Although he wrote manifestos, articles and books he never finished a single sizable work. Being primarily an activist he would stop, sometimes literally in mid-sentence, to play his part in struggles, strikes and rebellions. What he left to posterity is a collection of fragments. Even so, his writings are full of insights that are as relevant today as they were in his time. Many anarchists continue to draw from his premise of social revolution and methods of materialist analysis but other and much smaller aspects of Bakunin’s writings such as his anti-Semitism and tendency towards conspiratorial thinking are easily left behind.

The Danger of Dictatorship

While understanding that ideas and intellectuals have an important role to play in the revolution, a role of education and articulating people’s needs and desires, he issued a warning. He cautioned them against trying to take power and create a dictatorship of the proletariat. The notion that a small group of people, no matter how well meaning, could execute a coup d’etat for the benefit of the majority was a heresy against common sense. Long before the Russian revolution he warned that a new class of intellectuals and semi-intellectuals might seek to step into the shoes of the landlords and bosses, and deny working people their freedom.

In 1873 he foretold, with great accuracy, that under the dictatorship of the proletariat of the Marxists the party leaders would concentrate the reins of government in a strong hand and divide the masses into two great armies – industrial and agricultural – under the direct command of state engineers who will constitute a new privileged scientific and political class.

Bakunin understood that government is the means by which a minority rules. In so far as ‘political power’ means the concentration of authority in a few hands, he declared, it must be abolished. Instead there must be a ‘social revolution’ which will change the relationship between people and place power in the hands of the masses through their own federation of voluntary organisations.

It is necessary to abolish completely and in principle and in practice, everything that may be called political power, for as long as political power exists there will always be rulers and ruled, masters and slaves, exploiters and exploited.

Who now can say he was not right?

“God and the State” – Classic work discussing religion, the state and conception and critique of authority. Bonus: Listen to The Discourse Collective podcast episode discussing this essay and summarizing the arguments (Part 1 and Part 2 – TBA)

“Marxism, Freedom and the State” – Collected extracts of Bakunin’s writings on his disagreements with Marx and disagreements over the state and conceptions of revolution. It is in this work that Bakunin famously predicted the authoritarian result of any future “worker’s state.”

“The Paris Commune and the Idea of the State” – Written shortly after the momentous Paris Commune that rocked late 19th century Europe, Bakunin gives his assessment and draws lessons from the event.

The Legacy of Bakunin by Paul Avrich – Essay on Bakunin by the leading historian of the 19th and early 20th century anarchist movement in Russia and the United States.

Struggle Archive on Bakunin – Archive of articles and resources related to Bakunin with emphasis on various debates within the left.

We Do Not Fear Anarchy; We Invoke It! – This 2015 volume written by Robert Graham and published by AK Press explores the titanic struggle in the First Workingmen’s International between Bakunin, anarchists, and federalists on the one hand and Marx and his supporters on the other. Very highly recommended!

Revolutions Podcast – Bakunin is brought to life in three detailed and well researched episodes of Mike Duncan’s Revolutions Podcast series focusing on the Russian Revolution. Bakunin’s personal biography, philosophy, program and an account of his conflict with Karl Marx in the first international are all covered. 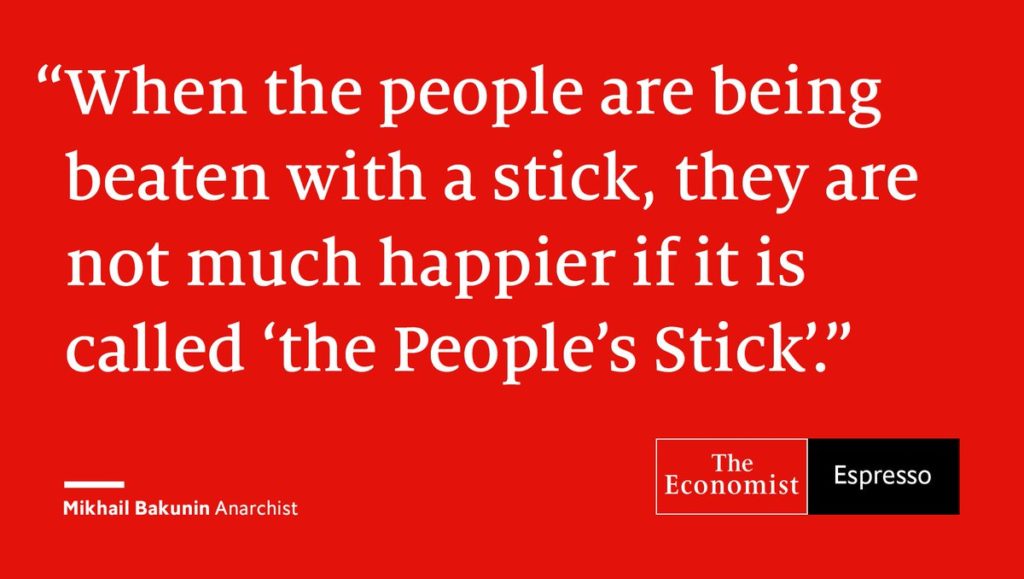 Image: The Economist ironically quoting Bakunin: “When the people are being beaten with a stick, they are not much happier if it is called ‘the People’s Stick.'”

“Freedom without socialism is privilege and injustice; socialism without freedom is slavery and brutality”

“Let us therefore trust the eternal Spirit which destroys and annihilates only because it is the unfathomable and eternally creative source of all life. The passion for destruction is also a creative passion.”

“I am properly free when all the men and women about me are equally free. Far from being a limitation or a denial of my liberty, the liberty of another is its necessary condition and confirmation.”

“Revolution everywhere must be created by the people and supreme control must always belong to the people organized in a free federation of agricultural and industrial associations . . . organized from the bottom upwards by means of revolutionary delegation.”

-Program and Purpose of the Revolutionary Organization of International Brothers, 1868

“If there is a State, there must be the domination of one class by another and, as a result, slavery; the State without slavery is unthinkable – and this is why we are the enemies of the State.”

“[Anarchists do] not accept, even in the process of revolutionary transition, either constituent assemblies, provisional governments or so-called revolutionary dictatorships; because we are convinced that revolution is only sincere, honest and real in the hands of the masses, and that when it is concentrated in those of a few ruling individuals it inevitably and immediately becomes reaction.”

Biographical text from Worker’s Solidarity Movement in Ireland. If you have suggestions on improving this post or additional material to include, please email us at eec [@] blackrosefed.org. Thank you.

For additional biographical sketches of anarchist figures see “Brazilian Bakunin: Anarchist Militant Domingos Passos” and you may also enjoy this short excerpt from classical anarchist Peter Kropotkin “Can the State be Used for the Emancipation of Workers?“